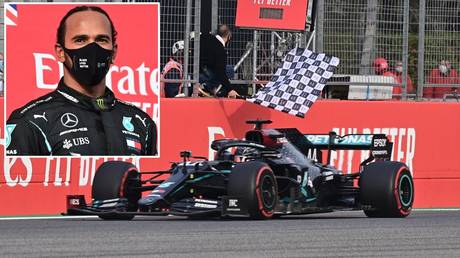 Lewis Hamilton helped his Mercedes team secure a seventh Formula 1 constructors’ title by taking the win at Imola, then raised alarm bells by revealing he wasn’t sure whether he’d still be on the grid in 2021.

Hamilton’s ongoing contractual situation has been a topic of much conjecture throughout the season, with Hamilton and Mercedes team boss Toto Wolff playing down concerns over the issue.

But, following Wolff’s recent comments suggesting that he’s ready to hand over the reins to another team boss soon, Hamilton revealed he’s similarly unsure over whether he’ll be a part of the F1 grid next season.

The six-time world champion, who already has a hand on a seventh drivers’ title in 2020, was asked about Wolff’s future with the team and responded, “I don’t even know if I’m going to be here next year.”

As things stand, Hamilton has not yet signed a contract to race in 2021 and the British ace said that his interests away from racing could lead him away from the Formula 1 circus next year.

“I feel great and still very strong… but you mentioned about Toto and shelf-life and there’s multiple things that do stay on the top of my mind.

“I would like to be here next year but there’s no guarantee of that, for sure. There’s a lot that excites me of the afterlife (after racing), so time will tell.”

In a separate interview, Wolff moved to play down Hamilton’s comments, saying, “I hope it’s not going to happen. I think we’re going to have a pretty frantic driver market out there (if it does).

“I think nothing is ever secure. Like Niki Lauda in the 70s, he could wake up one morning on a Friday or Saturday morning at the track and just say, ‘I’m not having fun anymore.’

“I think that can happen to anybody but we want to continue this journey. Lewis and I and all the team, we are not finished.”