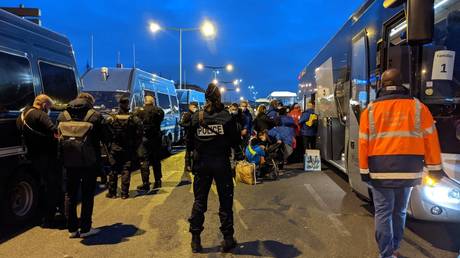 French officials forced the evacuation of more than 2,000 migrants from an illegal, makeshift camp in the northern suburbs of Paris in the early hours of Tuesday morning, in a move that has been condemned by human rights groups.

Police began removing the migrants at around 4:30am local time, rounding individuals up and ordering them to line up and board buses to reception centers and gyms for processing. According to witnesses at the scene, the situation quickly escalated after a crush near the vehicles, with police deploying tear gas to control the crowds, affecting some children in the process.

Paris Police Prefect Didier Lallement told reporters at a briefing that “this operation aims to ensure that people with the right to be here are given shelter and those who do not have that right do not remain on French territory.”

Authorities explained that the action had been taken to “guarantee the safety and health of all” in light of the Covid-19 threat in the area and unsanitary conditions in the camp. In early October, Doctors Without Borders published a survey that showed, out of more than 800 vulnerable migrants tested, emergency accommodation centers found that between 23 percent and 62 percent tested positive for coronavirus.

While France Terre d’Asile Director Pierre Henry praised the “vital” and “long-awaited” move, Solidarite Migrants Wilson criticized the approach taken, due to “more police officers than social workers” being used in the operation.

Following the dismantling of the camp on Tuesday, 30 migrant advocate organizations signed an open letter condemning the “endless and destructive cycle” of forced evictions.