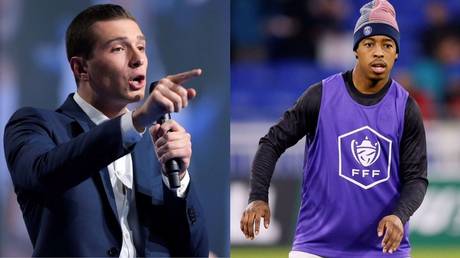 Bardella, who is vice president of Marine Le Pen’s National Rally party, accused the World Cup winner of “supporting jihadism” and of “taking other people for fools” after he said he hadn’t understood what Khabib’s post was all about, because he doesn’t know Russian.

“No French team for@ kimpembe_3 the one who supports jihadism on Instagram, who does not want to take responsibility and who considers us to be fools. Stop being naive, let’s not miss anything else! ” Bardella wrote.

The UFC lightweight champion had savaged Macron amid mounting tensions in France over religion and freedom of speech, after satirical magazine Charlie Hebdo posted cartoons of Islam’s Prophet Muhammed.

Khabib – a devout Muslim who hails from the Republic of Dagestan – shared his disgust at the French president on social media, accusing him of insulting Muslims by defending Charlie Hebdo’s right to publish the cartoons.

“May the Almighty disfigure the face of this scum and all his followers, who, under the slogan of freedom of speech, offend the feelings of more than one-and-a-half billion Muslim believers. May the Almighty humiliate them in this life, and in the next. Allah is quick in calculation and you will see it,” Khabib wrote in Russian, accompanying the text with a mock-up image of an imprint of a boot on Macron’s face.

Kimpembe was reportedly one of several French players to “like” Khabib’s message, along with Karim Benzema, Tiemoue Bakayoko, Ricardo Faty and Mamadou Sakho, as well as Barcelona midfielder Miralem Pjanic and former Manchester United and Real Madrid star David Beckham.

Kimpembe, who was severely criticized for “liking” Khabib’s post, issued a tweet on Saturday in which he suggested there may also have been a linguistic misunderstanding.

“I play sports, not politics,” he said. “I don’t speak Russian either. I strongly condemn terrorism, all forms of violence without reservation, and all nauseating attempts at manipulation,” he wrote.

Halo Infinite loses director after being delayed to 2021