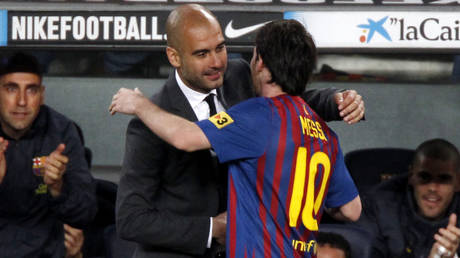 Barcelona presidential candidate Victor Font has said he wants to bring Pep Guardiola and other club legends back to the Camp Nou in a bid to keep Lionel Messi at the club.

Font believes their return will make the club more competitive and convince Messi to extend his stay.

“Replacing the best generation the world of football has ever seen, which I believe we have had over the last decade, is a big challenge,”Font said.

“Particularly at a time when competition is intense and many clubs are owned by very powerful owners.

“FC Barcelona also need a significant investment to rebuild the stadium and all in a world which has been hit with one of the worst crises ever.

“It is clear we need a very solid plan to meet these challenges and this is what we have been doing over the last few years.

“It is our intention to build a very strong and competitive project and we are very lucky at Barca that we inherited a style of play that Johan Cruyff instilled throughout the organization.

“And most of the best professionals who know about this style are also fans and love the club – like Pep Guardiola, Xavi, Iniesta, Puyol.

“They are all legends that love Barcelona but do not work for Barca today – we need to bring them back to ensure we will have a very competitive project.

“The only thing Messi needs is to know he is part of a competitive project that aspires to win the next Champions League.

“We have no doubt that if we basically have the honor to take the helm of FC Barcelona we will be able to achieve that [Messi staying].”

Messi is in the final year of his contract at Barcelona, where he has spent his entire career, meaning he can leave for free at the end of the season.

The 33-year-old has become increasingly disillusioned at the team’s diminishing ability to compete at the highest level, as evidenced by a series of embarrassing failures in the UEFA Champions League.

In the last three seasons, Barca have exited the competition having been the victim of comebacks from Roma and Liverpool – who were 4-1 and 3-0 down in their ties, respectively – and most recently were demolished 8-2 by Bayern Munich.

Messi attempted to engineer a move away in the summer on the back of the latest humiliation, but following the resignation of club president Josep Maria Bartomeu – with whom he had a public falling-out – on Tuesday, there’s hope his replacement can get him to sign a new deal.

Guardiola hasn’t won the Champions League since 2011, but his return would likely be enough for Messi to change his mind.

The forward earned 14 of the 34 honors he’s won at Barcelona under Guardiola’s tutelage between 2008 and 2012, and the manager has won five league titles and an array of other trophies at Bayern Munich and Manchester City since he left the Camp Nou.

Guardiola is in his fifth season at City – making it his longest stint at a club since he began coaching – and is out of contract at the end of the campaign, so he could be available to take over next summer.

Handing roles at the club to former teammates Puyol, Xavi and Iniesta would also strengthen Messi’s bonds at the Camp Nou.

Presidential hopeful Font also addressed Bartomeu’s bombshell announcement in his resignation speech that he accepted proposals for Barcelona to join a £4.6 billion ($6 billion) European Premier League in the future.

“I was very surprised by that statement because I know the project is not a reality at this moment in time,” Font said. “So joining a competition that does not exist is kind of weird to say the least.”

He added that under his leadership the club “would be very much interested” in exploring “alternatives” and “interesting projects,” but he feels clubs should “aspire” to improve the Champions League, while having strong domestic leagues “is good for the sport and footballing ecosystem.”