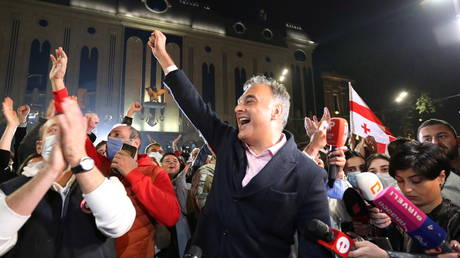 The ruling Georgian Dream party is set to win the general election in the former Soviet republic and is unlikely to need a coalition partner to form a new government. Opposition leaders have called for street protests.

With over 97 percent of ballots counted, Georgian Dream has secured 48 percent of votes in Saturday’s general election, according to the national election administration. The United National Movement (UNM), the most successful electoral bloc of opposition parties, has won 27 percent of the votes.

Of the 60 participating political groups, seven parties and two party blocs have managed to surpass the one-percent threshold to secure seats in the Georgian parliament. But only two of them have results measuring in double digits.

The ruling party is also leading in majority districts, where 30 of the 150 parliament seats were up for grabs under Georgia’s mixed election system. More than a dozen of those mandates are likely to go to Georgian Dream candidates in the first round, giving the party a narrow parliamentary majority. Georgia reformed its election law earlier this year, lowering the representation threshold for parties and allocating more weight in mandates to the proportional vote.

The outcome was strongly rejected by the UNM after the initial results started to emerge on Saturday. The opposition accused the government of rigging the election and usurping power.

Georgian ex-president Mikheil Saakashvili, who leads the UNM despite being a wanted man in Georgia and living in exile, has called for a total mobilization of opposition forces and proposed talks to form a national unity government. He even offered not to seek the office of prime minister to appease parties that had refused to join his bloc during the campaign due to his involvement.

A mass anti-government protest was called in central Tbilisi on Sunday to denounce the result of the election. The event remained peaceful at the time of writing.

Critics of Georgian Dream, however, may find it difficult to rally popular support after international observers gave their stamp of approval to the ballot on Sunday. The democracy body of the Organization for Security and Co-operation in Europe (OSCE) said that, despite some reported infractions, the election overall was competitive and fair.