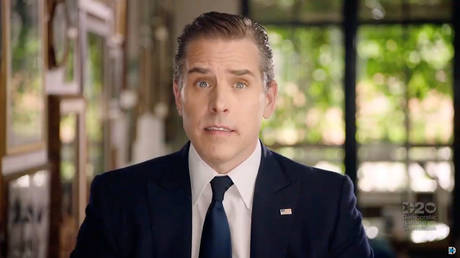 The laptop belonging to Joe Biden’s son, Hunter, which became a source of damaging leaks, would have been an easy target for any amateur hacker, Daily Mail reports, claiming that the password it was protected with was “Hunter02.”

While the device has become illustrious for providing alleged evidence of the Biden family’s corrupt dealings in Ukraine and China, as well as some salacious footage of Hunter that has since leaked, it also contained plenty of sensitive and even top-secret data, such as the names and email addresses of Secret Service officers who protected Joe Biden when he served as US vice president.

Now, if the fresh report by the Daily Mail is to be believed, it turns out that all this data was protected by nothing but a simple password, “Hunter02.”

The laptop also contained phone numbers of hundreds of US top officials and public figures, including almost every member of former US President Barack Obama’s cabinet as well as those of the Clintons, former US State Secretary John Kerry and ex-FBI head, Louis Freeh.

Names and mobile phone numbers of dozens of senators and members of the House of Representatives were also on a long list of contacts sent to Hunter during the time his father was vice president. Nancy Pelosi, the speaker of the House of Representatives, and the Senate Republican leader, Mitch McConnell, were on that list, too – among a trove of other sensitive materials, accounting for 11 gigabytes of data and dating back to as early as 2011.

Yet, the 50-year-old businessman was apparently careless about this trove. Not only had he failed to protect it with a better password or a two-factor authentication, he also eventually left it at some back-street Mac Store in Wilmington, Delaware. Hunter reportedly brought it there for repairs only to never take it back. Eventually, the FBI allegedly picked it up from there.

Earlier, the New York Post published some emails said to be leaked from the laptop. The messages detailed some of Hunter’s dealings with the Chinese and Ukrainian companies – along with providing fuzzy allusions to Joe Biden’s involvement or at least “interest” in them.

The former vice president and the current Democratic presidential candidate himself repeatedly denied any involvement in his son’s foreign business dealings. President Donald Trump, meanwhile, called the leaks evidence of the Bidens’ corruption.

The new revelations come just two days before Americans are expected to head to the polls at the upcoming presidential elections.