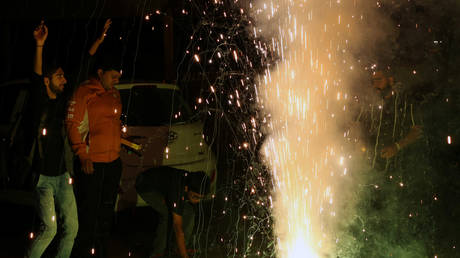 India’s northwestern state of Rajasthan has decided to crack down on fireworks, arguing that their use endangers public health amid the ongoing coronavirus pandemic.

The ban on selling and setting off firecrackers is aimed at protecting Covid-19 patients and the general public from “poisonous smoke emanating due to fireworks,” Rajasthan Chief Minister Ashok Gehlot explained on social media.

The official added that the smoke is a “health hazard” for those suffering from heart conditions and breathing problems.

The poisonous smoke emanating from fireworks is a health hazard for #COVID19 patients as well as those suffering from heart ailments & breathing problems. In such a situation, people should avoid fireworks during Diwali.

Gehlot specifically warned that people should “avoid” setting off fireworks during Diwali, an annual Hindu celebration, known as the ‘Festival of Lights’, which is expected to take place later this month.

The minister also pointed out that fireworks should be “stopped” at weddings and other events.

Indian media reported that the sale of firecrackers has already plummeted in certain areas of the country because people became more “conscious” about their health amid the pandemic, and due to restrictions on religious processions.

The best antivirus protection for Windows 10 in 2020