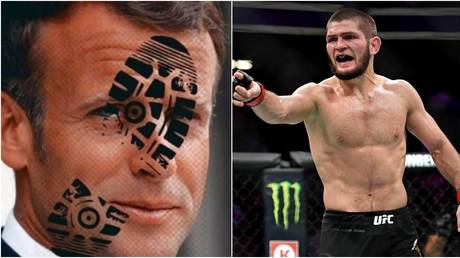 France has raised its terror alert level to ‘maximum’ after a series of killings amid mounting tensions sparked by a row over religion and freedom of speech.

Russian UFC champion Khabib – a devout Muslim who hails from the Republic of Dagestan – shared his disgust at the French president in a message to his 25 million Instagram followers.

“May the Almighty disfigure the face of this scum and all his followers, who, under the slogan of freedom of speech, offend the feelings of more than one and a half billion Muslim believers. May the Almighty humiliate them in this life, and in the next. Allah is quick in calculation and you will see it,” Khabib wrote in Russian, accompanying the text with a mock-up image of the imprint of a boot on Macron’s face.

“We are Muslims, we love our Prophet Muhammad (peace and blessings of Allah be upon him) more than our mothers, fathers, children, wives and all other people close to our hearts. Believe me, these provocations will come back to them, the end is always for the God-fearing,” Khabib added.

The 32-year-old star also cited a verse from the Koran which translates as: “Surely those who offend Allah and His Messenger are condemned by Allah in this world and the Hereafter. And He has prepared for them a humiliating punishment.”

On Thursday, a knifeman killed three people in a church in the southern city of Nice in what Macron called an “Islamist terrorist attack,” while earlier in October schoolteacher Samuel Paty was beheaded by a radicalized Chechen refugee just outside Paris.

The deaths followed the publication of cartoons of the Prophet Mohammed in satirical magazine Charlie Hebdo – whom Macron has defended under the magazine’s right to freedom of speech.

However, Macron has been accused of enflaming tensions with his remarks and failing to act in a more conciliatory way toward France’s Muslim population.

Khabib is not the only Russian MMA fighter to attack Macron over his perceived anti-Islamic comments.

Khabib is among the most popular Muslim sports stars in the world and regularly shares religious messages with his army of online followers.

He frequently speaks of his devotion to his religion, and in the past has criticized the holding of rap concerts and theatre performances in his native Dagestan which he has deemed inappropriate.

The unbeaten MMA star announced his retirement at the weekend after defeating lightweight title challenger Justin Gaethje in their bout in Abu Dhabi.

How do I track my ballot if I voted by mail? We tell you how for every state