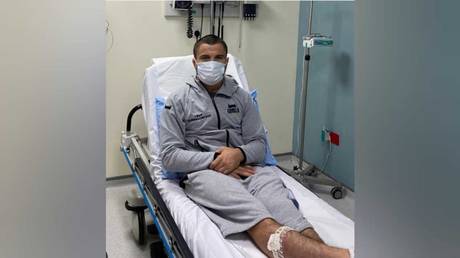 Umar Nurmagomedov, the cousin of UFC lightweight champion Khabib, has reportedly been discharged from a Dubai hospital and has returned to his homeland after he was forced to withdraw from UFC 254 through illness.

Umar, who is 12-0 as a professional, had been in line to make his debut UFC appearance on ‘Fight Island’ in a bantamweight fight against Sergey Morozov last weekend but came down with a fever on fight week which was brought on by a staph infection.

However, citing a source close to the fighter, news agency TASS has said that Nurmagomedov has fully recovered and is awaiting a new Octagon assignment.

“Umar recovered and returned to Russia. He is waiting for the opportunity to debut in the UFC,” a source close to Nurmagomedov said.

This marked the third time this year in which Nurmagomedov’s maiden UFC appearance was postponed. An initial April debut against Hunter Azure was called off due to the onset of the Coronavirus pandemic, while another fight opposite England’s Nathaniel Wood was scratched following the passing of Khabib’s father and trainer, Abdulmanap.

Umar Nurmagomedov last competed in November for Gorilla Fighting Championship in Uzbekistan where he defeated Braian Gonzalez by first round rear-naked choke submission.

With Khabib’s immediate future unclear following conflicting reports as to the status of the retirement he announced moments after defeating Gaethje, Umar Nurmagomedov now awaits information on a fourth opportunity to set foot in the UFC cage for the first time.