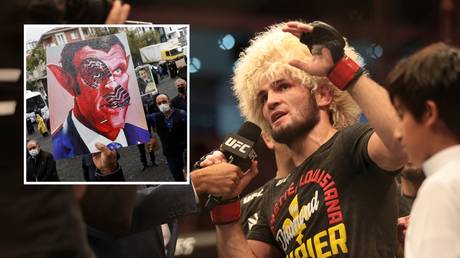 After taking aim at French President Emmanuel Macron, UFC lightweight champion Khabib Nurmagomedov has again voiced his fury at “enemies of Islam” amid an escalating row over religion and freedom of speech.

In a scathing post to his more than 25 million Instagram followers, the UFC lightweight champion – a devout Muslim – reiterated his disgust at what he sees as insults directed at his Islamic faith.

“Today, under the pretext of fighting for freedom of speech, the enemies of Islam and Muslims of different levels are trying to offend the feelings of hundreds of millions of believers around the world by drawing cartoons of the best of people,” Khabib wrote.

“Do they really believe that in this way they will be able to extinguish the light of Allah, the spread of which He promised to bring to the end in his beautiful book?”

“…They not only insulted the feelings of Muslim believers, but also challenged the Lord of the worlds, who promised to protect his messenger from the attacks of ignorant people.

“Well, they did what they did and their business is with Allah, and we will only say that truly you cannot harm Muhammad and the blessed memory of him in the hearts of one and a half billion people.

The UFC star concluded with the message: “May Allah bless our beloved prophet as well as his family, companions and all those who followed them in good. And may Allah bring down His punishment on everyone who encroaches on the honor of the best of people – his prophet Muhammad. Indeed, Allah does not break promises.”

The Instagram post followed similar sentiments from Khabib on Friday, when he directly accused French President Macron of insulting hundreds of millions of Muslims by defending the right of satirical magazine Charlie Hebdo to publish cartoons of the Prophet Mohammed.

The message – which was ‘liked’ by more than 3 million people – was accompanied by an image of Macron with a boot imprint on his face.

France has been gripped by religious tensions after Charlie Hebdo republished images of the Prophet Mohammed at the start of September.

Two weeks ago, schoolteacher Samuel Paty was beheaded by an Chechen-born Islamic extremist after showing cartoons of the Prophet Muhammad to his students.

On Thursday, three people were killed in a church in the southern city of Nice in what President Macron labelled an ‘Islamist terrorist attack’.

Macron has faced censure from sections of the Muslim world for his defense of the magazine, as well as for comments in which he described Islam as “experiencing a crisis all over the world today.”

Relations have become particularly strained with Turkey, a situation not helped when Charlie Hebdo published demeaning images of Turkish President Recep Tayyip Erdogan, and there have been calls in some Muslim countries to boycott French goods and services.

Dagestani star Khabib is not the only Russian MMA fighter to vent his anger at Macron.

“Because of this, [Macron] is trying to insult believers…I want to tell Ksenia Sobchak, you are a dirty, stupid animal,” Ismailov raged.

In response to Khabib’s attack on Macron on Friday, Sobchak claimed that the UFC fighter’s words could incite violence towards the French leader.

Khabib announced his retirement from the octagon after defeating Justin Gaethje at UFC 254 in Abu Dhabi last weekend, extending his undefeated record to 29-0.

The 32-year-old star regularly uses his social media platforms to share religious messages, and has previously been involved in rows over rap concerts in his native Dagestan as well as theater performances deemed ‘inappropriate’.