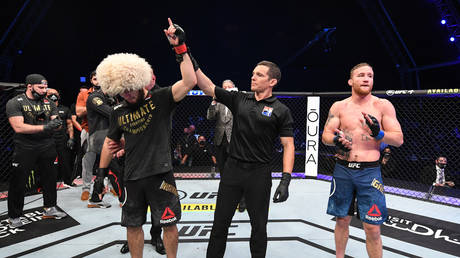 UFC lightweight champion Khabib Nurmagomedov says that his decision to retire from mixed martial arts wasn’t taken lightly but it was the only correct step to take following the passing of his father and coach, Abdulmanap.

A tearful Nurmagomedov announced that he was stepping away from the sport moments after his UFC 254 win against Justin Gaethje on Fight Island last weekend, signaling the conclusion to a record-breaking, 29-fight undefeated career.

The decision came as a surprise to most, including several trusted members of his coaching team who were kept in the dark as to his decision as the Russian champion was expected to call time on his career if he registered just one more win to reach an unparalleled 30-0 record.

But speaking with acting head of Dagestan, Sergey Melikov, Nurmagomedov outlined the thought process which led to him retiring inside the cage in the Middle East last Saturday night.

“Immediately after [the death of my father] they offered me a fight, I had to make a decision: either finish my career, or return, fight and after that leave,” Khabib said, via TASS.

“Some people close to me weren’t happy that I ended my career, but I said to them, ‘even if I fight for another 10 years, there will come a time when I have to leave.’ That decision in any case would come, at 32 years old, at 34 or at 35.”

Nurmagomedov’ outlined to UFC commentator Jon Anik that the decision to retire was borne from a conversation he had with his mother following the death of his father, who passed away on July 3 following a protracted battle with Covid-19.

His mother, he said, wasn’t keen on the idea of her son continuing his fight career outside the tutelage of Abdulmanap, with Khabib saying that he gave her his word that the UFC 254 clash with Justin Gaethje would be the final prizefight of his outstanding professional career.

However, despite following through with his word he says that the decision was a difficult one, and will compel him to ‘reformat’ his life from being a professional athlete towards something else entirely.

“It was a really difficult decision for me, because I’ve been doing this all my life, for as long as I can remember, and to leave everything and reformat (yourself) is a difficult task,” he explained.

Whatever the reasoning behind Nurmagomedov’s decision, it is clear that he feels freer as a result – and he suggested that he won’t miss the ‘burden of responsibility’ which comes with being a top-level UFC fighter.

“It was a burden of responsibility which worried me before a fight, because I’ve had injuries, serious injuries, I was in intensive care for five days,” he said.

Such is the fight game, though, you cannot ever be certain when it comes to retirement announcements – and UFC boss Dana White said this week that he is working to have Khabib return for one more fight in an effort to reach the 30-0 mark.

“I’ll tell you this, and I haven’t told anybody this yet, but Khabib and I have been talking,” White told Zach Gelb on CBS Sports Radio on Thursday.

“He was completely emotional that night when he got through that fight. I have a feeling that he might go for 30-0. I think that he’s not going to retire. His dad wanted him to get to 30-0, and I think he wants to honor his dad’s wish.”