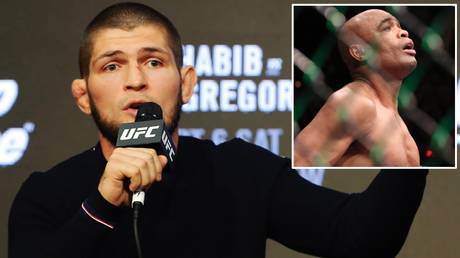 Just one week after he announced his own retirement in the center of the UFC octagon, Khabib Nurmagomedov sent his best wishes to another departing legend, Brazilian hero Anderson Silva.

Silva was finished by Uriah Hall in the main event of UFC on ESPN+ 39 on Saturday night as he brought the curtain down on his UFC career with a stoppage defeat.

After the fight, the former UFC middleweight champion knelt in the center of the cage and had an extended moment of pause before eventually leaving the octagon for the final time as a UFC fighter.

Also on rt.com
‘I made a BIG mistake’: Dana White regretful as 45-year-old Anderson Silva KNOCKED OUT in final UFC fight (VIDEO)


The Brazilian, sits third in the all-time list for the most title defenses in UFC history with 10, was considered the sport’s most spectacular star during his peak, when he produced some of the most stunning performances ever seen inside the octagon.

But that career on the big stage came to a close when the 45-year-old lost to Hall in a fight that he had pre-agreed with the UFC would be his final bout inside the octagon.

Showing his respect to the former champion, Khabib took to Twitter to send a message to Silva, posting, “@SpiderAnderson absolute legend, good luck warrior, may God protect and bless your family.”

Silva retires from the UFC with a career record of 34 wins, 11 losses and 1 no contest.