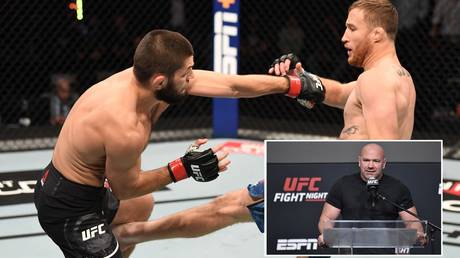 UFC 254 was reportedly only the promotion’s fifth-highest pay-per-view event of 2020, with a viewership said to be around 675,000 tuning in to see Khabib Nurmagomedov’s lightweight title defense against Justin Gaethje.

That’s according to the Sports Business Journal, who reported the event drew in less than half of the 1.3 million buyers who tuned in to witness UFC 251, in which Kamaru Usman successfully defended his welterweight title against Jorge Masvidal.

Conor McGregor made his return to the sport at UFC 246, beating Donald Cerrone via TKO in just 40 seconds.

At UFC 253, Israel Adesanya extended his MMA record to 20-0 as he beat Paulo Costa via a second-round TKO to defend his middleweight title for a second time, while at UFC 249 Gaethje won the interim lightweight title – and earned his shot against Nurmagomedov – against Tony Ferguson.

The numbers come after UFC president Dana White said on October 20 that the fight was trending to beat the 2.4 million PPV buys Nurmagomedov’s 2018 clash with McGregor generated.

“This thing is trending off the charts for us right now,” White had said. “So, today is Tuesday and on Monday, this thing was trending to be the biggest fight we have ever had. Not Thursday, not Friday, Monday.”

However, White did question whether that trend would continue, though, given the event at Fight Island in Abu Dhabi began at 2pm Eastern Time in the United States.

Sure enough, the lack of a primetime slot appears to have had a significant impact on the viewership as the event had to compete with college football.

According to the Nielsen Rating System, the preliminary card – which began two hours earlier – averaged just 343,000 viewers on ESPN2, making it the lowest-rated UFC broadcast of the year.

Nurmagomedov extended his record to 29-0 in the main event as he defended his lightweight title for the third time in his second-round submission of Gaethje, before announcing his retirement from the sport.