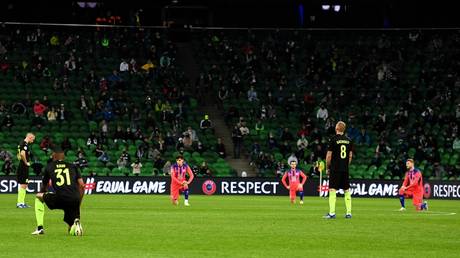 Players from Russian team Krasnodar have predictably faced accusations of racism online after some of them did not take a knee before their 4-0 defeat to Chelsea in the UEFA Champions League on Tuesday.

Chelsea’s players all took a knee ahead of the game in Russia while four Krasnodar players did the same, but some fans hit out at broadcasters for not drawing attention to those that did not join their teammates in doing so.

“Hey BT Sport, why are you cutting away from the Krasnodar players not taking the knee?” one fan fumed. “Keep the camera on them and shame them #BLM.”

Another added: “Worrying that this wasn’t mentioned on air,” while one even responded by claiming that it’s “crazy how open racism still is in so many parts of the world.”

Wow. Watching the UEFA champions league game between Chelsea and Krasnodar in Russia and they took a knee for the end racism campaign and more than half of Krasnodar team stood. Just crazy how open racism still is in so many parts of the world.

French team Marseille received similar censure after none of their players joined Manchester City in kneeling before the English side’s 3-0 victory in their game on Tuesday.

Kneeling in solidarity with the Black Lives Matter movement became customary in the Premier League when football resumed in June as part of the widespread protests against racial inequality and police brutality, following the death of George Floyd at the hands of white police officer Derek Chauvin – who has been charged with murder – in May.

However, the custom of kneeling before games has not been adopted in France or Russia, and Marseille’s players instead stood together along the center circle. Reports in France have suggested the players wanted to pay respects to Samuel Paty – a teacher who was beheaded in a terrorist attack in Paris last week – with a minute’s silence.

UEFA has said players are free to kneel if they chose, or to remain standing.

In regards to Krasnodar, several Twitter users came to the defense of the players who stood.

“Absolutely ridiculous!” exclaimed a third. “So people don’t have a choice whether to support a cause or not?”

Isn’t it your own right ? Doesn’t mean they are racist ?

Why is this news? Trying to push that they are racist?

Absolutely ridiculous! So people don’t have a choice whether to support a cause or not?

In the case of both Krasnodar and Marseille, it was perhaps the incongruous nature of their circumstances that led to the perceptions of racism.

They were far from the only sides not to take a knee in the Champions League this week, where the decision to do so appeared to be random.

Both sides took the knee before Manchester United’s 5-0 win over RB Leipzig.

However, neither side did ahead of Juventus’ 2-0 defeat to Barcelona or Borussia Dortmund’s 2-0 victory against Zenit St. Petersburg, the latter despite vocal Black Lives Matter advocate Jadon Sancho starting for the Bundesliga outfit.

Last month, English Championship club Queens Park Rangers’ director of football Les Ferdinand explained they decided to no longer take a knee before games because it’s “impact has now been diluted” and the gesture “will not bring about change in the game – actions will.”