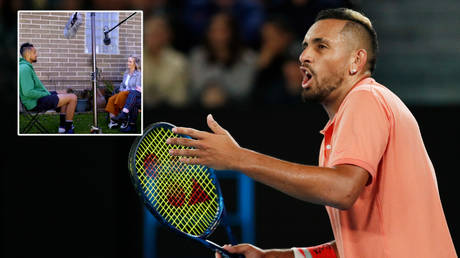 Tennis wildman Nick Kyrgios has accused the sport of being inherently racist and revealed his struggle to grapple with its culture, claiming that the game is made for “white gentlemen” while shunning “someone colored like myself”.

Controversial Australian Kyrgios, who has a Greek father and a Malaysian mother, was on typically forthright form as he suggested that non-white players were not made welcome or put in a position to thrive in the sport.

His mother, Norlaila, also said that her son had been subjected to racism when he was an emerging prospect and spoke of the family’s “journey” to improve Kyrgios’s reputation for fiery behavior on and off court.

“It’s supposed to be a nice white gentleman’s sport,” Kyrgios told quirky new TV show Reputation Rehab, which aims to save public figures from the “cultural scrapheap” and give them a “second chance”.

“So seeing someone coloured like myself go out there, be different and be successful – it’s not so easy to see at times. It’s an old, traditional sport.”

The show joked that “surely no-one’s being racist” before interspersing the interview with a clip of champion Australin swimmer Dawn Foster telling a news program about Kyrgios: “If they don’t like it, they can go back to where their father or their parents came from.”

“At the beginning, it was dreadful,” Kyrgios’s mother recalled of his formative experiences. “It was heartbreaking. I wanted to guard him.

Despite the tennis calendar being thrown into chaos by the pandemic for much of 2020, Kyrgios has remained in the headlines after fiercely criticizing the likes of world number one Novak Djokovic for his stance on observing public health precautions.

He has also repeatedly riled tennis great Boris Becker in a series of online rows, with his critics pointing to his litany of fines for incendiary incidents on court, including a $113,000 dollar punishment for an outburst against an umpire at the Cincinnati Masters last year when he smashed his racket and did not shake his opponent’s hand.

“If I’m in a tough battle and I’m losing, I tend to swear a lot,” admitted Kyrgios, playing a charm offensive with the forgiving pair of female interviewers.

“Off the court, I actually don’t. I’m actually quite chilled and melow. I’m never going to condone swearing and getting angry for no reason.

“I love what I can get out of the sport. A lot of young kids look up to me now and I can give back, but at times tennis is a sh*t sport. It’s so frustrating.

Nick Kyrgios has told the ABC that as “coloured” player it is hard to succeed in a “white gentleman’s game”. This is for a show called Reputation Rehab. I wonder if he gets any PR advice at all. Perhaps he does but doesn’t listen? Maybe being a heel (wrestling term) is his brand?

“I’ve been through a lot. It all happened so quick for me. I wasn’t used to having cameras in my face, being in the spotlight.

“After Wimbledon [2014] when I beat [Rafael] Nadal, everything kind of changed.

“There were people camping outside my house for two weeks when I got back home, following me around when I went to the mall. I wasn’t really ready for the dramatic changes that I was experiencing.”

When asked whether Kyrgios deserved his status as a bad boy, his mother said she “hated” the term. “I think you can shake the image but it takes time,” she warned.

“It takes hard work to try to do good and one little mistake will put you back many steps. That’s always the way it is, isn’t it? But that’s our journey at the moment so we just embrace it.”

As US election looms, Russians have ceased to hope that anything good will come out of America, regardless of who is president