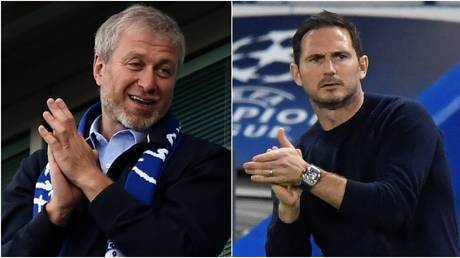 Chelsea manager Frank Lampard praised billionaire owner Roman Abramovich after he made a rare appearance to watch his team in their Champions League group stage victory at Krasnodar.

Chelsea eased to a 4-0 win in their Group E encounter in southern Russia on Wednesday night thanks to goals from Callum Hudson-Odoi, Timo Werner, Hakim Ziyech and Christian Pulisic.

Watching on from the stands was Abramovich, who made the most of his team’s visit to his homeland.

It is believed to have been the first time the 54-year-old oligarch has been at a Chelsea game since a pre-season friendly against RB Salzburg in Austria back in August of 2019.

Lampard said he had not spoken with his boss, but he was pleased to hear he was at the game.

“To have him here is a nice bonus for myself and the squad,” the Blues manager said.

“I’m very pleased we put on what I thought was a good performance.”

Abramovich has not attended a game at Chelsea’s Stamford Bridge home for around two years, after suffering visa woes amid the UK-Russia spat over the poisoning of former spy Sergey Skripal.

Despite his physical absence from games, Lampard said he always felt Abramovich’s backing.

“I always feel the support of the owner of the club, whether he’s here at games or not,” the former Blues midfielder said in Krasnodar.

“A couple of my staff members spoke to him, but by the time I came out in the warm-up he wasn’t around.

“We got four goals and a clean sheet in his home country, and I hope it made him happy.”

Chelsea fans were clearly delighted to see their oligarch patron in the stands at Krasnodar Stadium.

“Big Roman Abramovich in the house!” wrote one, while another pined for the days the Russian visited London.

“Man I miss the days when he sat on top watching the players at Stamford Bridge, glad to see the king back,” he wrote.

Roman Abramovic in the building? Man I miss the days when he sat on top watching the players at Stamford Bridge, glad to see the king back.

The energy tycoon will no doubt have been pleased with the result on Wednesday night, although Chelsea stuttered somewhat before making things comfortable.

Jorginho missed a first-half penalty before Krasnodar goalkeeper Matvei Safonov gave the visitors a helping hand by allowing Hudson-Odoi’s tame effort to squirm under his body and into the net.

Krasnodar applied pressure of their own in the second half, but were undone 15 minutes from time when a penalty was awarded against Aleksandr Martynovich for handling inside the box, even though the ball had been struck at him from point-blank range and had hit the defender’s thigh before bouncing up onto his arm.

German hitman Werner rifled home the spot-kick before wingman Ziyech – who was making his first Chelsea start since his summer arrival from Ajax -scored in the 79th minute and second-half substitute Pulisic added further gloss to the scoreline with a finish on 90 minutes.

For Abramovich, it was a chance to see first-hand some of the talent he acquired for the team in a £200 million-plus summer spending spree which brought the arrival of Werner, Ziyech and German wonderkid Kai Havertz, who also started on Wednesday.

Goalkeeper Edouard Mendy, another new arrival in the summer, continued his impressive form by keeping a third clean sheet in a row and a fourth since signing from Rennes – handing the Blues a major boost in a position where they have been beset with problems.

Abramovich wasn’t the only Russian billionaire in attendance on Wednesday night.

Krasnodar founder Sergey Galitsky, a retail magnate, was also in the stands as the club he founded 12 years ago and has bankrolled ever since played their first Champions League group stage home game.

Galitsky has spent upwards of $400 million on building stunning infrastructure for the club, including a stunning 35,000-seater stadium, state-of-the-art academy and surrounding park for locals to enjoy in the city, which lies 100km from the Black Sea coast.

UEFA Covid-19 protocols allowed up to 30 percent of the stands to be filled on Wednesday night, which Krasnodar took advantage of to record an attendance of around 10,500.

Speaking on the presence of fans in the stands – which remains banned in the UK due to coronavirus restrictions – Lampard said he did not want to “jump into a political argument”  but that it had been a welcome sight.

Start your Thursday with the boss’ reaction to our fantastic win in Krasnodar last night! 💪💬

4 things you need to know about Black Friday 2020

The next stimulus check is in limbo. When it comes, will your payment be larger or smaller?