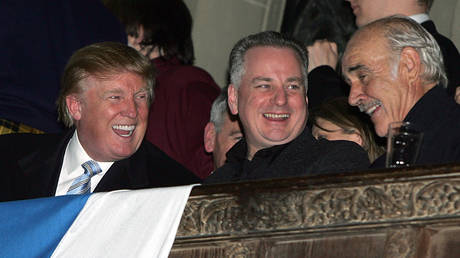 President Trump tweeted his condolences for Sean Connery’s family, saying he was “a tough character” who’d once helped him secure property planning in Scotland. But it only reignited the woke bashing of the “wife-beating” star.

“The legendary actor, 007 Sean Connery, has past [sic] on to even greener fairways,” Trump tweeted on Sunday, a day after the actor’s death at 90.

“He was quite a guy, and a tough character. I was having a very hard time getting approvals for a big development in Scotland when Sean stepped in and shouted, ‘Let him build the damn thing,’” the president continued.

He said Connery’s endorsement was all he needed to proceed, and the development went “swimmingly” from that point on.

“He was so highly regarded & respected in Scotland and beyond that years of future turmoil was avoided. Sean was a great actor and an even greater man,” Trump wrote.

….all I needed, everything went swimmingly from there. He was so highly regarded & respected in Scotland and beyond that years of future turmoil was avoided. Sean was a great actor and an even greater man. Sincere condolences to his family!

The president’s condolences served only to trigger the actor’s critics, however. They already had enough to complain about, with the actor being lambasted as “problematic” and sexist, based on some troublesome comments about women he’d made in the past.

Trump was slammed for making the actor’s death about himself, despite numerous other public figures having also shared anecdotes about Connery and photos of themselves with him. Others simply rebooted past criticism and slated both the actor and Trump as misogynists.

“I got four words into that Trump Sean Connery tweet before muttering ‘before I get to the end of this tweet he will make this about himself’ and lol,” Daily Beast White House Reporter Asawin Suebsaeng tweeted.

“He was a great actor but interesting that you would regard him as a ‘great man.’ He beat women,” actress Mia Farrow tweeted in response to the president.

In other words, what made Sean Connery quite a guy in Trump’s eyes was that he helped Trump. The narcissistic sociopath speaks again. https://t.co/WcOnzK07m9

Actress Patricia Arquette responded to Trump’s tweet by accusing Connery of being “an anti Semite,” though without providing any evidence.

He was also an anti Semite.

Well, I guess since Trump collects misogynists who like to hit women like kids collect candy on Halloween, we shouldn’t be all that surprised he just loves Connery.

Some have accused the president of exaggerating his relationship with Connery to capitalize on the star’s death, but the two had certainly been pictured together at numerous events over the years, and Trump had previously cited Connery’s help with his Scottish businesses.

Trump reportedly told then-UK Prime Minister Theresa May in 2018 that Connery had been “better” than his own appeals lawyer in securing approval for projects in Scotland. Perhaps as a thank you, Connery was the first member of Trump’s golf course in Aberdeenshire.