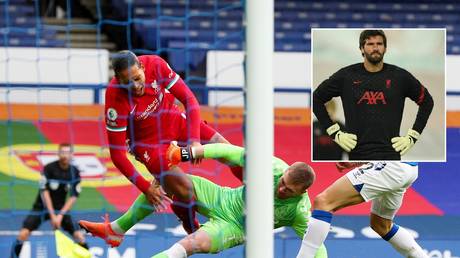 Liverpool’s Brazilian goalkeeper Alisson has hit out at Everton’s Jordan Pickford for the knee-high challenge which resulted in Virgil van Dijk receiving a season-ending injury, saying that the incident was “not necessary.”

The Dutch defender suffered an injury to his anterior cruciate ligament (ACL) following the tackle as England shotstopper Pickford attempted to stifle a Liverpool assault in the October 17 Merseyside derby.

Van Dijk’s teammates Adrian and Georginio Wijnaldum were fiercely critical of Pickford’s reckless tackle following the game and now Alisson has added his voice to the Anfield chorus of disenchantment.

Pickford was not issued with a red card following the challenge after replays showed that there was a marginal offside in the build-up to it. This decision was subsequently slammed by several players.

“But thinking what I have in my mind when I go for a situation, I go to finish the situation because if I go too soft I know the opponent can score.

“Everyone has their own way to go for the ball. I don’t agree with that [Pickford’s] way, everybody can see that but yeah it was just an unnecessary moment and movement.”

Alisson’s comments come after it was confirmed that Van Dijk’s surgery, which took place in London on Friday, was a ‘success’.

“The Liverpool defender’s planned operation took place in London and was conducted successfully,” a club statement reads. “Van Dijk will now immediately focus on the beginning of his rehabilitation with the support of the Reds’ medical department.”

With Liverpool now braced for an assault from their Premier League rivals amid the absence of the talismanic defender, Jurgen Klopp says that his player is in for a difficult few months on the sidelines.

“This time is always unpleasant,” Klopp told the media ahead of Liverpool’s Saturday clash with West Ham. “Everybody who has had surgery knows that. You don’t wake up and everything is fine, you feel the surgery.

Still, the next Merseyside derby at Anfield on February 20 may have an added level of intrigue to the already bustling Liverpool-Everton rivalry, particularly as further Reds make known their anger at Pickford’s actions.

“The way Pickford went in was completely stupid in my opinion,” Dutch midfielder Wijnaldum said. “I don’t believe he wanted to injure Virgil but the way he made the tackle he didn’t care about what happened after the tackle. It’s happened a lot in games against Everton.

“Accidents can always happen in football. You can be unlucky and injure someone but the way they were doing it was completely unacceptable. It makes it even harder when they don’t get punished, in this case Pickford.”

The best leggings in 2020 for yoga, working out and lounging