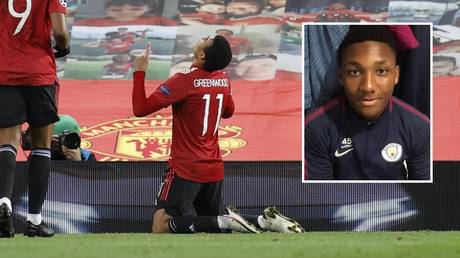 Greenwood opened the scoring in the 21st minute when he coolly slotted home past Peter Gulacsi after being slipped in by Paul Pogba.

The goal prompted an emotional celebration from the 19-year-old, who paid tribute to Wisten on Twitter after the game: “That one was for you bro. RIP Jeremy Wisten.”

Greenwood grew up playing youth football against Wisten, who played in City’s academy until he was released in May last year.

Wisten died on Saturday aged 18 after being found unresponsive at his family home in Wythenshawe, Manchester.

Greenwood had already paid tribute to him earlier in the week when he linked to a Go Fund Me page for Wisten’s family, which has raised more than £11,000 ($14,000).

Fans praised the United star for his tribute to Wisten on social media.

“Absolutely brilliant Mason – what a classy goal and a classy gesture,” wrote one, while another echoed: “Class act on and off the pitch.”

“Awww. Now I know why he was emotional after that goal,” a third added.

It remained 1-0 until the 74th minute, before United finished the game with a flurry of goals including a hattrick from substitute Marcus Rashford.

The England international raced clean through onto Bruno Fernandes’ ball to score his first, which was given after a VAR review after the offside flag had incorrectly been raised.

He pounced on a defensive mixup four minutes later to make it 3-0, before Anthony Martial struck from the penalty spot after being fouled by Marcel Sabitzer.

Rashford rounded out the scoring in injury time after being teed up by the Frenchman.

If you missed the first deadline, you can still claim a $500 stimulus catch-up check for your kids