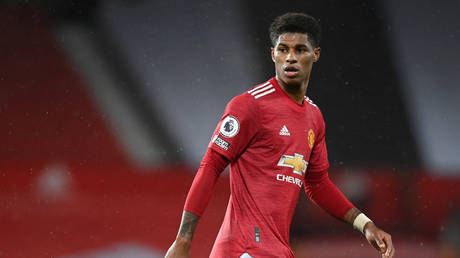 The petition started by Manchester United striker Marcus Rashford calling on the UK government to extend free school meals to children has surpassed one million signatures.

Rashford continued his campaign to end child food poverty by creating the petition on October 14, and it reached the landmark on Wednesday afternoon.

The 22-year-old was awarded an MBE earlier in the year for his efforts, and on Wednesday it was also announced that he would receive the City of Manchester Award.

Following recommendations from the National Food Strategy, Rashford’s petition calls for the government to “expand free school meals to all under-16s where a parent or guardian is in receipt of Universal Credit or equivalent benefit” and to “provide meals and activities during all holidays.”

His petition also asks that the value of Healthy Start vouchers – which are given to pregnant women and families with young children to spend on milk, fruit and vegetables – increase from £3.10 ($4.03) to “at least £4.25 per week.”

The UK government provided free school meals to children over the Easter holidays this year and performed a U-turn to do so again in the summer amid Rashford’s high-profile campaign.

However, the government has said it will not do so again and last week Conservative MPs defeated a Labour motion calling for free school meals to be provided over the holidays through to next Easter by 322 votes to 261.

Shadow environment secretary Luke Pollard said Labour will “force another vote on this” if the government does not perform a U-turn on the issue as it did in the summer.

If the Government doesn’t U-turn on their refusal to feed hungry kids during school holidays Labour will force another vote on this in the House of Commons. https://t.co/Mw0YTnQ46Z

Rashford, who grew up on free school meals in Manchester, is gearing up to face RB Leipzig in the UEFA Champions League on Wednesday.

The England international has netted four times in eight matches for the Red Devils in all competitions this season, including a late winner against Paris Saint-Germain in the Champions League when they met last week, as well as contributing two assists.

9 spooky things Alexa can do on Halloween tonight