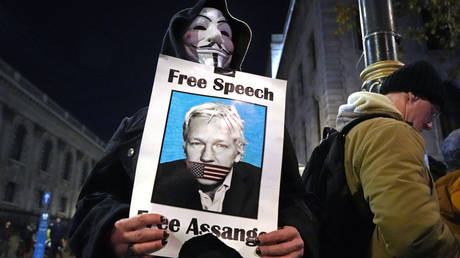 German lawmakers have formed a group in defense of WikiLeaks co-founder Julian Assange who is fighting extradition to the US from a high security prison in Britain.

In a joint statement the MP’s said they wanted to send a “clear signal for the protection of the freedom of expression and the press that are endangered by the extradition of Julian Assange.”

Dagdelen argued sending Assange to the US, where he could face up to 175 years in prison if found guilty of all 17 criminal charges brought against him, would create a dangerous precedent for journalists worldwide.

“Regardless of how you feel about Assange’s political views, it should be natural to demand a fair trial and defend his civil rights,” Heinrich explained as cited by German media.

The WikiLeaks co-founder has been confined in Belmarsh prison in London where he waits for the verdict on his extradition case to be delivered on January 4. Assange’s legal team and family have been warning that his health had significantly deteriorated during the time behind bars.

A UN special rapporteur on torture, Nils Melzer, said earlier this month that Assange’s “prolonged solitary confinement in a high security prison is neither necessary nor proportionate and clearly lacks any legal basis.”

Melzer argued the activist must be released in order to recover and “adequately” prepare his legal defense in the extradition case.

Berlin has so far refused to speak in favor of Assange. In October, the Left MP Sevim Dagdelen asked Foreign Minister Heiko Maas in parliament if the government believed Assange’s extradition would set a dangerous precedent. Maas replied that the government “doesn’t see it that way,” and assumes the UK will handle the case in accordance with its “international obligations.”

US bond market is BROKEN, thanks to the Federal Reserve – Peter Schiff — DHT Business News