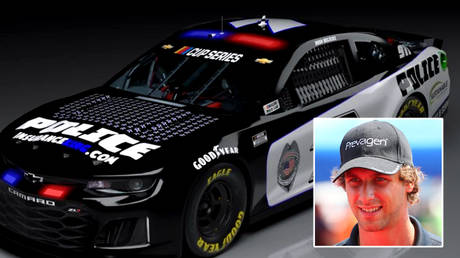 Fans have praised NASCAR ace Josh Bilicki after he turned his car into a replica police cruiser ahead of a race, creating a contrast to the Black Lives Matter-daubed symbolism that Bubba Wallace gave his vehicle earlier this year.

American Bilicki revealed that his car will be dedicated to police officers killed in the line of duty at Sunday’s Cup Series race, featuring more than 230 stars painted on the hood to represent cops reported to have been killed while working so far this year.

The 25-year-old has collaborated with police welfare organization The Wounded Blue, which helps officers who have been wounded or injured.

“We came up with the idea to make the car look like a cop car because NASCAR began with bootleggers outrunning the police,”  Dan Block, the president of Bilicki’s sponsors, Insurance King, told TMZ.

“We ended up going one step further with this paint scheme and are dedicating this design to each police officer that lost their life in 2020.”

The replica features police lights, a striking black and white base scene and the slogan “Protect & Serve” written across its side.

“Blue lives matter,” replied a self-declared opponent to the Black Lives Matter movement on Twitter, referring to a year in which figures have shown that the number of officers to have died has risen from 147 in 2019 to 234 in 2020, although Covid-19 has accounted for 130 of those deaths.

“At the start of the season, NASCAR was parading Bubba Wallace to the front of the line for a fake noose story,” said another, recalling the decision by the only black driver in the competition to compete in a Black Lives Matter-themed car in June.

“When the ratings collapsed, they started pandering to win fans back, but remember who NASCAR originally threw under the bus for political correctness. Let them hurt some more.”

Once Nascar’s TV ratings start inching up on a regular basis, the aging demographic changes and the attendance stops shrinking I will know Nascar and Bubba are on to something. Until then I will leave all the nebulous numbers to the newbies.

Oh sir…your racism is showing. This is exactly why every sport needs athletes like Bubba, & people are done apologizing for interrupting your perfectly manicured white system in this NASCAR & any other predominantly white sport. Get used to seeing what the real world looks like

Well, at the start of the season @NASCAR was parading @BubbaWallace to the front of the line for a fake noose story. When the ratings collapsed they started pandering to win fans back, but remember who nascar originally threw under the bus for PC. Let them hurt some more.

The move was announced days after Wallace’s sponsors, Root Insurance, released a cinematic new advert featuring the social justice campaigner, declaring that “progress owes no apology” and that they were “proud to support unapologetic change”.

Wallace is about to switch to NBA legend Michael Jordan’s 23XI Racing, but fans rowed over new figures that showed a potential broadening of interest in the sport because of the partnership.

“Bubba isn’t bringing people to NASCAR more than he is just playing off the current social drama and BLM cr*p,” said one.

“His people are interested in how much sh*t he can stir up, not about becoming NASCAR fans. The next thing will be along soon to replace him.”

The critic received short shrift from some quarters. “Oh sir, your racism is showing,” hit back one observer.

.@joshbilicki .@NASCAR this is freaking awesome. I could care less about NASCAR, but I will check out the race just to see this car run. A great tribute to our fallen American police officers who are very under appreciated these days.

I was looking for a new favorite driver.

“This is exactly why every sport needs athletes like Bubba. People are done apologizing for interrupting your perfectly manicured white system in NASCAR and any other predominantly white sport. Get used to seeing what the real world looks like.”

Another called the move “awesome”. “The sport needs personalities like [driver] Hailey Deegan and Bubba Wallace to expand interest outside of their core viewership and maintain and grow a healthy fanbase,” they argued.

“Every new eyeball adds Revenue in the forms of TV contracts, track sponsors and tickets and team and driver sponsorship.”

Speaking about the advert on Thursday, Wallace claimed: “This means a lot to me for many reasons but mostly the most human of emotions: acceptance.

“We also share a vision of inclusion. It’s a positive change I try to represent, even when I fall short. But that vision should never be apologetic.”