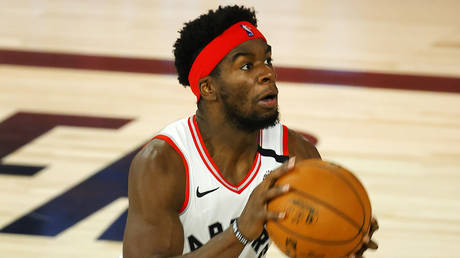 Toronto Raptors’ shooting guard Terence Davis has been arrested in New York and charged with assault for allegedly attacking his ex-girlfriend, whom he is said to have punched in the face repeatedly.

Davis was arrested on Tuesday after he and a woman got into an argument at the Beekman Hotel in Manhattan at around 8:30pm, an altercation which turned physical when he allegedly hit her multiple times in the face.

It’s said the 23-year-old also grabbed and broke her phone after she tried to film him.

Police subsequently took the NBA rookie into custody before charging him with misdemeanor assault and misdemeanor criminal mischief, each of which can carry a prison sentence of up to one year.

The woman reportedly went to hospital for treatment after suffering swelling and pain in her left eye.

The Raptors have not commented on the arrest beyond confirming they are aware of the reports and are looking into the matter.

He was the only Raptors player to feature in all 72 of their regular season games last season, although he only started four of them, averaging 7.5 points per game. In the playoffs, he played in six of their 11 games, averaging 7.2 points in each.

His efforts earned him a spot in the NBA’s All-Rookie Second Team.

Although he signed a two-year deal with the Raptors, only the first year was guaranteed.