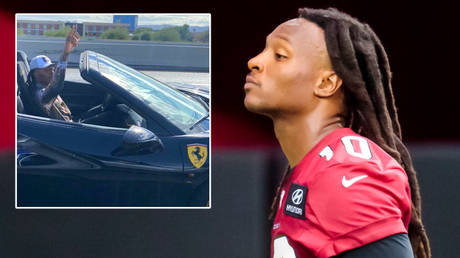 NFL star DeAndre Hopkins has admitted making an obscene gesture at a caravan of Donald Trump supporters on his way to a game, although he has denied driving dangerously after being accused of swerving wildly in and out of traffic.

Wide receiver Hopkins was on his way to help the Arizona Cardinals edge past the Seattle Seahawks when his journey was interrupted by a procession of Donald Trump supporters, frustrating the social justice campaigner as he tried to reach the State Farm Stadium.

A Twitter user claimed that the 28-year-old had driven his Ferrari recklessly while gesticulating at the group showing their support for the head of state ahead of the US presidential election next month.

“My eight-year-old son was in one of the cars you were swerving in and out of as you were…trying to cause an accident,” wrote the man.

“I really was about to give the peace sign to them, but this finger was kinda hurting so it didn’t make it up in time…”You have to hear @DeAndreHopkins side of the story about what happened on the way to the game the other night…

“You’re a piece of trash. Make your political statements but you put people at risk today.”

Hopkins was caught on camera on the road ahead of his starring role in the 37-34 victory, catching ten passes for 103 yards and a touchdown.

“I guess I got in between a train or a bunch of cars that I wasn’t supposed to be in between,” Hopkins later told a podcast.

“They were honking the horn at me to tell me to get out of their way, and I didn’t.

“The guy in front of me stepped on his brakes and tried to stop dead in traffic.

I am in LOVE with this tweet…as if I needed more reason to follow this guy….

“I was going to do the peace sign to him but this [index] finger here was kind of hurting so it didn’t make it up in time.

“If I was in a Ferrari speeding, I don’t think you would be able to take a still picture of me.”

Hopkins was one of several high-profile players to take part in a video message urging the NFL to “listen to your players” over issues of racism in the days following the killing of George Floyd in May.

In the same month, he showed his support for former San Francisco 49ers quarterback Colin Kaepernick – whose invention of the gesture of taking a knee before games has infuriated Trump – by posting a photo of himself in a t-shirt branded with the message “IMWITHKAP”.

April Garcia, who had been driving in the rally, said Hopkins had been speeding and was identified after supporters thought they recognized him as an NFL player and began to investigate on their phones.

Nothing says systemic racism and oppression like a black man on a 2 year $54,000,000.00 contract, in a Ferrari, flipping the bird to white people.

How many black NFL owners are there??🤔

“It’s scary when they are coming up fast and swerving into you,” she told AZ Central, adding that other “intolerant” people had hurled water and objects at the caravan.

Hopkins’ actions received a mixed reaction on social media. “I am in love with this…as if I needed more reason to follow this guy,” said one fan.

Another added: “DeAndre Hopkins driving a Ferrari giving the double bird to a pro-Trump caravan is the type of content I need.”

A critic retorted: “Nothing says systemic racism and oppression like a black man on a two-year, $54 million contract, in a Ferrari, flipping the bird to white people.”

UK House of Lords member says Trump could start a WAR & pardon himself even after election loss, fails to be taken seriously — DHT USA News