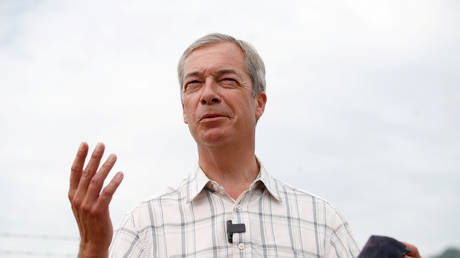 The announcement that the UK’s leading Brexiteer will relaunch his political party and take on the Tory coronavirus strategy has been condemned by many Britons, but Farage has garnered support as anti-lockdown sentiment grows.

UK politician Nigel Farage has received a mixed reaction following the announcement late on Sunday night that he would be renaming the Brexit Party as Reform UK, and was vowing to challenge the government on its “woeful” Covid strategy.

Farage and Brexit Party Chairman Richard Tice made their plans public in an article in the Daily Telegraph.

While Farage and Tice stated their aim was to be the party of reform, tackling contentious issues such as immigration, the funding of the BBC, and the unelected House of Lords and other inequities of the electoral process, their article and the reaction to it has been overwhelmingly related to challenging the UK’s Covid strategy.

The two leaders announced, “We’re launching the anti-shutdown party” and would be supporting the Great Barrington Declaration, which advocates herd immunity and was signed by more than 15,000 scientists and medical practitioners. However, the approach has been largely discredited by governments and the World Health Organization, and was described as being “flawed” until there is a vaccine by UK Health Secretary Matt Hancock.

Farage has been branded as self-seeking by many, who claim his Brexit Party has lost its relevance, with the UK due to leave the EU customs union when the transition period ends on December 31.

Labour MP David Lammy slammed Farage as “shameless,” adding that his latest move was down to his income as a Member of the European Parliament being about to run dry, and his alliance with Donald Trump being unlikely to bear fruit following the US election on Tuesday.

Nigel Farage’s EU salary ran out, Trump is unlikely to remain President & it’s too cold to shout at refugees from Dover.So now he seeks votes risking lives by opposing public health measures in a pandemic.There has never been a more shameless opportunist in British politics. https://t.co/15Pniuf9ft

Meanwhile, Scottish comedian Frankie Boyle, employing the irony he is famed for, noted that Farage’s career had been marked by political opportunism.

Reform UK is unlikely to have the widespread popularity of the Brexit movement, however – it was reported by public opinion and data analyst YouGov on Sunday that only 23 percent of people oppose a second lockdown.

Nonetheless, it appears many were happy to see Farage taking on the government, with some expressing delight that the “lying” Tories would be challenged.

One supporter was equally keen to see PM Boris Johnson’s leadership held to account, praising Farage’s decision to challenge the “madness of this government.”

Whatever is true, he is going to really shake Johnson up. Finally we will have an opposition – so badly needed to challenge the madness of this government.

Farage’s move comes as England prepares for a second lockdown. On Saturday, Johnson stated that the government needed to take decisive action and would be plunging England into a four-week lockdown from Thursday.