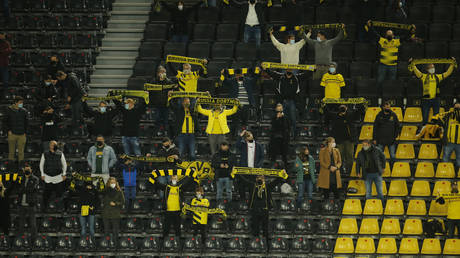 German top-flight the Bundesliga is closing stadiums again amid concerns over a rise in Covid-19 cases, providing a major blow to fans and clubs in the first major league to have allowed supporters to return to matches in person.

Fans had been allowed to return to stadiums in mid-September, as figures suggested that Germany was faring better than many countries at containing Covid-19 infections, contrasting with nations such as Spain and England, where supporters are yet to be allowed back in at elite matches.

Now stadiums will be closed in line with the rest of the country, which will be subject to a partial lockdown from next week.

Bundesliga games will continue to go ahead without supporters in attendance under the new rules, coming in to play from 2 November and lasting until the end of the month.

In view of the dramatically increasing number of corona infections, the federal and state governments in Germany have decided that all sports events in November – including the Bundesliga – will be played behind closed doors [dpa via Bild] pic.twitter.com/6Oom5GHQ8Q

“At least it’s fair again,” responded one fan, referring to the local state restrictions that have meant some arenas have reopened to allow thousands of supporters to watch games while others have kept their doors closed.

“For some time it really looked like only the teams from Bayern had no fans in their stadiums.”

Some clubs in England are currently campaigning to allow a limited number of fans to return, pointing to research showing that the virus is less likely to spread in outdoor settings.

Many have taken a heavy financial hit from the lack of revenue caused by the banning of crowds, with FIFA estimating in September that the total cost of the pandemic to the sport would be more than $14 million.

At least then it’s fair again, for some time it really looked like only the teams from Bayern had no Fans in their Stadiums

One of the world’s richest clubs, Manchester United, also announced a revenue drop of 19 percent as the former Champions League winners’ debts spiraled, partly as a result of the crisis.

Germany legend and Bayern chief executive Karl-Heinz Rummenigge
warned on Tuesday that the league could “collapse” should the schedule be halted again.

“If the Bundesliga is suspended again, if we are not allowed to play even without fans, bit-by-bit several clubs would have to declare bankruptcy,” Rummenigge told SID.

“And as a result, the Bundesliga would be in danger of collapsing entirely.”

Schalke, who have one of the largest fanbases in the country, and Werder Bremen have been among the German clubs to admit to balance book worries.