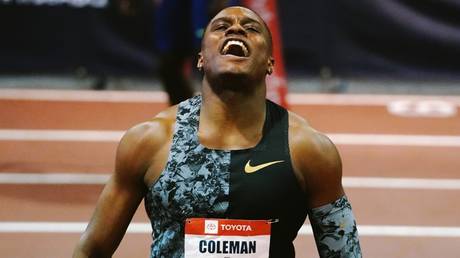 World 100 meters champion Christian Coleman will not be taking to the starting blocks in next year’s Olympic Games after falling foul of anti-doping regulations, it was confirmed Tuesday.

The Athletics Integrity Unit (AIU) stated that Coleman had been hit with a two-year ban after breaching the whereabouts rules regarding anti-doping screenings.

Coleman escaped a ban last year after missing a hat-trick of drug tests, was handed a provisional suspension in June. But now, after being found to have breached wherabouts rules, which require athletes to register their location in order to facilitate random drug-testing visits, Coleman has now been banned for two years.

“We regret to say that we do not think there is any mitigation which can fairly be relied upon to reduce the sanction from the two-year period,” the AIU said in a statement on its website.

“Unfortunately, we see this case as involving behavior by the athlete as very careless at best and reckless at worst.”

At the time of his provisional suspension, Coleman had claimed that doping officers had not followed protocols nd were not present for the full duration of the one-hour window at his hom on Dec. 9, where he was registered to have been located at the time.

He had gone Christmas shopping that day, and claimed he had returned home inside the 7:15pm-8:15pm window, but testers testified they were present outside the front of his house for the full hour.

Coleman testified that he had arrived home from Christmas shopping shortly before the end of the one-hour period, but receipts from his shopping showed that he had purchased 16 items from a Wal-Mart store at 8:22pm, refuting his testimony.

“We do not accept the Athlete’s evidence,” the AIU stated.

“It is obvious that in fact the athlete did not go home until after making his 8:22pm purchase. We are comfortably satisfied that this is what happened.”

Coleman’s ban is set to end on May 13, 2022, and that he was able to appeal the tribunal’s decision at the Court of Arbitration for Sport should he so wish.

Three failures to properly file whereabouts information, or being absent during the hour stated in a 12-month period, can result in a one- or two-year suspension.

And the sprinter, who previously escaped suspension from a USADA ban after three missed tests after a dispute over the 12-month window used, has had the maximum punishment handed to him after his latest indiscretions, with two of his previous missed tests joining his most recent instance to breach the 12-month rule.

“The fact is that he had had the narrowest possible escape from a potential ban on this prior occasion,” the AIU said.

“It might be thought he would have learned from this experience… in fact, that is not at all what happened.”

The psychology of 'stress baking': Why so many are making bread in 2020