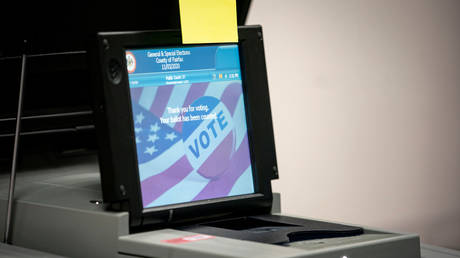 Trump campaign senior advisor Jason Miller has set off an uproar among opponents by suggesting the president’s lead will be decisive enough to claim victory on election night, after which Democrats will try and “steal it back.”

Miller painted a fairly confident image of Trump’s reelection chances during a Sunday interview, but also suggested that any swing in Biden’s favor after election day could be Democrats “trying to steal” their way to the top.

“If you speak with many smart Democrats, they believe that President Trump will be ahead on election night, probably getting 280 electoral [votes] somewhere in that range, and then they’re going to try to steal it back after the election,” Miller said.

Miller believes Trump will have 290 electoral college votes on election night so “no matter what they try to do, what kind of hijinks or lawsuits or whatever kind of nonsense they try to pull off, we’ll have enough electoral votes to get President Trump re-elected.”

1) We won’t award electoral college votes until all the votes of a state are counted. So no, Trump will not be “probably getting” 280 on Election Night, Jason Miller.2) Counting ballots cast by mail should never be called stealing the election. It’s counting votes. Period. https://t.co/cWfoZ70keH

Trump has stated it would be “very proper and nice if a winner is declared” on election night, instead of weeks later while more votes are counted, something Trump calls “totally inappropriate.”

Trump and his apparatchiks like Jason Miller aren’t uninformed about how votes are cast, or confused about how long it takes to count them. They know what they’re doing. They’ve given up trying to win the election. They’re trying to lay the groundwork for stealing it.

With Miller adding to Trump’s criticism of votes counted after election day, liberals took to social media to accuse the campaign of lying and trying to “steal” the election themselves, by prematurely claiming victory.

“What Jason Miller is saying is so stupid and dishonest (which is very much on brand). There is no precedent for this. Votes have always been counted after Election Day,” author Dan Pfeiffer wrote.

“This is a lie. Legally cast vote-by-mail ballots need to be counted, and many states will not be done counting them on election night,” CNN’s Jake Tapper added.

This is a lie.Legally cast vote-by-mail ballots need to be counted, and many states will not be done counting them on election night. https://t.co/BAgbrnHw03

Michigan Gov. Gretchen Whitmer told Tapper there was a “very real possibility” that Trump could declare election victory before final vote count, warning residents not to accept any early results until every vote is counted.

Trump tells WH pool reporters as soon as election is over “we’re going in with our lawyers.” Trump adviser tells CNN campaign plans to be aggressive on election night and could declare win if Trump is on verge of 270 electoral votes even as ballots being counted. Trump denies it.

Democratic candidate Joe Biden himself was forced to weigh in on the issue on Sunday night, saying: “My response is the president is not going to steal this election.”

Votes in every presidential race are counted for weeks after an election, however there are typically enough polls reporting for outlets to accurately declare a winner the night of. This, however, is not how it goes in rare cases such as with the critical swing state of Florida in 2000 with votes between George W. Bush and Al Gore were being counted and recounted in a controversy that officially ended when Gore conceded the race in December. Numerous media outlets called the state in Gore’s favor, while Bush would go on to win the state’s votes.

They had 4 years. Deal with your punishment

This year is set to be an unprecedented one that is difficult to predict since tens of millions of Americans have already voted early and a record number of people are voting by mail. This combined with Covid-19 restrictions slowing actual voting on November 3 down and you have a race many are predicting may not be able to be accurately called the night of as the president wishes.