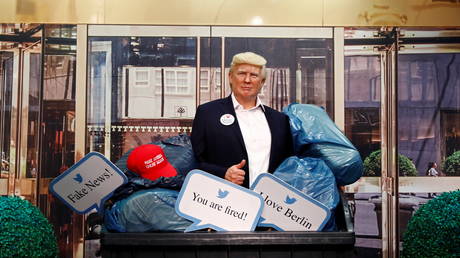 The Berlin branch of the world’s most famous wax museum has placed its figurine of US President Donald Trump in a garbage-filled dumpster, sparking verbal fisticuffs online.

Madame Tussauds in Berlin, an outpost of the legendary London wax museum, placed its lifelike replica statue of Trump in a dumpster on Friday, apparently in anticipation of the Republican incumbent being defeated by Democratic rival Joe Biden in the November 3 election.

Orkide Yalcindag, the museum’s marketing director, described the unorthodox curation as “symbolic” and “a preparatory measure.”

The museum appears to have taken pains to publicize the move, with a Reuters photographer snapping photographs of staff members placing the smiling Trump figurine in a garbage-bag-filled dumpster. A red “Make America Great Again” baseball cap was also tossed in the trash can.

The museum doesn’t typically ‘throw away’ wax models of US presidents, even after they leave office. Their statue of former president Barack Obama, for example, has been left untouched.

The politically-tinged stunt received wide applause on social media. Numerous commenters hailed the move as “perfect” and “where Trump belongs.”

Others suggested that the “whole Trump family” was heading for the dumpster after the presidential election.

I would have put it in the toilet but I guess the dumpster will do. Will they set it on fire now?

Not everyone swooned over the gimmick, though.

One Twitter user mocked the museum’s “brave commentary” and said it should try the same stunt with a wax statue of Islam’s Prophet Mohammed.

Brave commentary! Now do a wax figure of Muhammad.

Similarly unimpressed commenters theorized that Germans were just angry at Trump for demanding that it pay its fair share for military defense from NATO, and condemned the dumpster exhibit as tasteless.