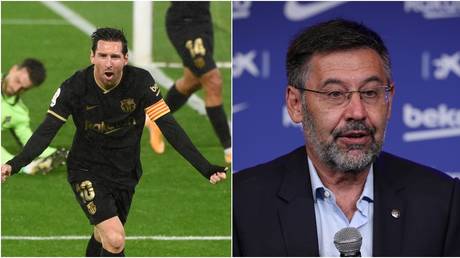 Barcelona president Josep Maria Bartomeu and the board of directors have resigned from the club, meaning Lionel Messi has got what he wanted – now it’s time for the Argentine star to get back to his best at the Camp Nou.

Bartomeu announced his resignation on Tuesday, at the same time almost casually dropping the bombshell news that he had “approved the acceptance of the requirements to participate in a future European Football Club Super League.”

Reports emerged last week of a proposed £4.6 billion ($6 billion) European Premier League, which would see a cabal of Europe’s biggest sides compete against one another in a FIFA-backed league format.

Bartomeu also explained why he did not resign after the club were humiliated 8-2 by Bayern Munich in the UEFA Champions League in August.

“As a Board we understood that, out of responsibility, we had to assume all these decisions. Most of them, awkward decisions, and unpopular.”

The 57-year-old also hit out at the treatment he has received in recent months, saying: “We have been disrespected, my colleagues on the Board and me; I have been insulted, threatened, even my family.”

Bartomeu described it as a “considered, serene decision” to step down, but it seems the president jumped before he was pushed – he was imminently facing a vote of no confidence, after more than 20,000 club members signed a petition to have him removed from office.

His departure was met with widespread celebrations from Barca fans on Twitter.

“It genuinely feels like a huge, Bartomeu-sized weight has been lifted off our shoulders,” wrote one emotional supporter. “What an amazing feeling this is.”

“Four years of pain finally coming to an end, thanks for nothing I guess,” said another, while a third added: “Good riddance to bad rubbish, at last we are free from your clueless board. The pain is too much, the decay unbearable. We are free at last.”

One simply shared a picture of the president captioned: “Thank you for nothing and f*ck you.”

Some of the more graphic tweets showed mocked-up images of Messi holding up the severed head of the departing Barca boss.

Bartomeu became interim president at the Camp Nou after his predecessor Sandro Rosell resigned in 2014. The following year he was elected to the position permanently on the back of the team winning the treble.

Barca have won three La Liga titles and three Copas del Rey since, but the team has increasingly struggled at the business end of the Champions League and the financial position of the club has significantly worsened.

Paris Saint-Germain snapped up Neymar in a world-record €222 million ($261 million) deal in 2017, and none of the club’s attempts to replace him – Ousmane Dembele, Philippe Coutinho and Antoine Griezmann, who cost almost €400 million between them – have come close to doing so.

Although in part due to the Covid-19 pandemic, the club also revealed their debt has more than doubled from €217 million to €488 million in the last financial year, leading to a net loss of €97 million.

On the pitch, Messi has had to cover some increasingly significant cracks despite entering his twilight years, and even he can only do so much.

Barcelona were knocked out of the Champions League by Roma in 2018 and Liverpool in 2019 – having led 4-1 and 3-0 in their ties, respectively – before this year’s 8-2 humbling by Bayern, which proved to be the final straw for Messi.

The Argentinian issued a transfer request, citing promises made to him by Bartomeu that he would be free to leave.

The 33-year-old said the president – whom he accused of not having had a sporting project in place at Barcelona for some time – reneged on his word and would only allow him to go if his €700 million buyout clause was met, so the player stayed rather than take his boyhood club to court.

Given Messi’s increasingly disillusionment at Barcelona and his public fallout with Bartomeu, he may well be privately celebrating Tuesday’s news.

There’s also cause for optimism from Barca supporters that the club legend might sign a new deal and stay put beyond the end of the season, when his current contract expires, if Bartomeu’s replacement can convince him of a new project at the Camp Nou.

Whatever happens with Messi’s future, he needs to put Bartomeu behind him and rediscover his best form.

In 19 appearances since football resumed in June after a lengthy break enforced by the pandemic, Messi has scored nine goals and assisted 14 in all competitions.

While most players would envy those numbers and it’s clear his creativity can’t be called into question, by his own incredibly high standards the forward hasn’t had the impact we’ve come to expect in front of goal.

Of those nine goals, just four have come from open play and none of those have been this season.

The No. 10 typically shines in El Clasico, but as of Saturday’s 3-1 defeat to Real Madrid – who had lost their two prior games and were held to a 2-2 draw by Borussia Monchengladbach on Tuesday – he has failed to score or assist against Los Blancos in his last six appearances against them.

Real are the reigning champions, but they’ve shown so far this season that they’re far from convincing – Barca should not be six points behind them already, even if they have played one game fewer.

The Catalan giants will also be hoping for a big performance from Messi in Wednesday’s Champions League clash with Juventus – who will be missing Cristiano Ronaldo due to his positive Covid-19 test – which could prove decisive in determining which of them wins the group.

Of course, Messi shouldn’t have to shoulder the burden alone. At 33 he isn’t quite at the peak of his powers anymore, and as he has become more reliant on his teammates to help out in recent years it has become increasingly clear that Barca – under the stewardship of Bartomeu – have failed to surround him with players who can provide the support he needs.

The president’s exit marks a fresh start, however, and under Ronald Koeman the team are now on the lengthy and difficult road to rebuilding with exciting youngsters like Ansu Fati and Pedri.

As the captain and one of the most senior players, though, it falls on Messi – for the remainder of the season at least – to lead them into the new era on the pitch and it’s vital he gets back to his match-winning best to do so if they’re to overhaul Madrid and have a chance of securing European glory.