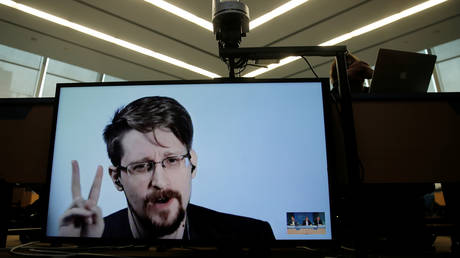 Exiled US whistleblower Edward Snowden has announced his decision to apply for Russian citizenship so that his son doesn’t have to share his fate, living separated from family and without a place to call home.

“After years of separation from our parents, my wife and I have no desire to be separated from our son,” former CIA and NSA contractor turned-whistleblower wrote in a series of Tweets on Saturday.

That’s why, in this era of pandemics and closed borders, we’re applying for dual US-Russian citizenship.

After years of separation from our parents, my wife and I have no desire to be separated from our son. That’s why, in this era of pandemics and closed borders, we’re applying for dual US-Russian citizenship. https://t.co/cCgT0rr37e

“Lindsay and I will remain Americans, raising our son with all the values of the America we love—including the freedom to speak his mind,” Snowden added. “Our greatest wish is that, wherever our son lives, he feels at home.”

And I look forward to the day I can return to the States, so the whole family can be reunited.

The surprise announcement, which is poised to galvanize critics demanding he be tried for “treason,” comes days after Edward Snowden and his wife Lindsay revealed they are expecting their first child – who will receive Russian citizenship when born.

Last week – seven years after he had stuck in Moscow and eventually received sanctuary from Washington’s attempts to silence him – US National Security Agency (NSA) whistleblower Edward Snowden has been granted a Russian permanent residency permit.

Snowden has been living in exile ever since he blew the lid off unprecedented mass surveillance operations conducted by US intelligence and its allies – including leaking a massive trove of documents proving the warrantless collection of Americans’ telephone records. Seven years later, a federal appeals court finally ruled that the bulk collection of data to spy on Americans was indeed illegal.

READ MORE: Snowden did nothing wrong? Court rules NSA spying on Americans’ phones was illegal all along

The Americans have demanded his extradition to face charges for violating the Espionage Act, and 37-year-old whistleblower faces the prospect of up to 30 years in prison if convicted.

Snowden repeatedly voiced his desire to come back to the United States if pardoned, or if at least there was any chance of getting a fair trial. President Trump, who once labelled the whistleblower a “traitor,” seemingly softened his stance recently. But while the push for Snowden to be pardoned gained momentum, the outcome of the US election is unpredictable and there is no consensus within the American public and political establishment on the matter.