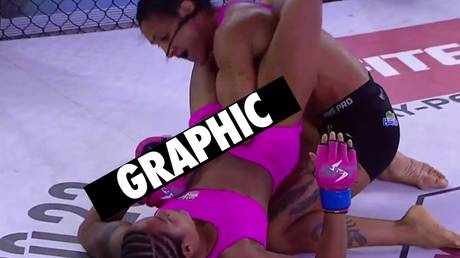 They say that everyone is entitled to one good scare on Halloween, and that is exactly what Sidy Rocha got last weekend when she suffered a nasty break to her left arm after getting caught in an armbar by opponent Karine Silva.

On Halloween night, the co-main event fight for the Standout Fighting Tournament (SFT) promotion in Sao Paulo, Brazil between Rocha and Silva was developing as a back-and-forth contest featuring several submission attempts, but one of them was far more eye-watering than the others.

Rocha, who was caught in an armbar submission by her 26-year-old opponent, was attempting to fight through the technique when her forearm gave way, contorting at a grotesque angle.

Incredibly, and probably down to the surge of adrenaline that often comes with being a professional cage fighter, Rocha attempted to fight on before the referee intervened and sought immediate medical attention for the injured fighter.

According to MMAFighting.com, Rocha was tended to by medics at the scene and will consult with medics ahead of an operation to correct the injury.

Rocha’s tough break is the latest such incident of a fighter breaking their arm as a result of an armbar submission. Two of the most notable ones were authored by former UFC heavyweight champion Frank Mir, who used a similar maneuver to snap Tim Sylvia’s arm in a world title fight in June 2004.

Mir once again snapped an opponent’s arm in December 2011, when he broke the arm of former PRIDE champion Antonio Rodrigo Nogueira, this time with a Kimura.

Beyoncé may have just said the most relatable thing ever

Missed first IRS deadline? You still have time to claim $500 stimulus check for your kids