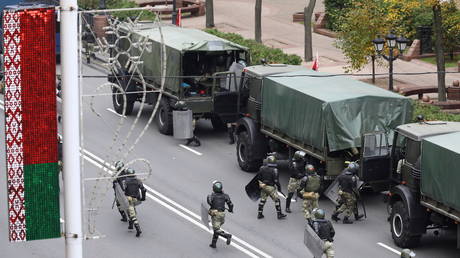 The Belarusian opposition will hold its weekly anti-government protest on Sunday. The authorities have mobilized dozens of vehicles, including water cannon, setting the scene for a possible crackdown.

Footage published by Belarusian media on Sunday morning showed columns of trucks and armored vehicles moving towards the center of Minsk. The deployment apparently comes in response to opposition plans to hold their latest rally in the Belarusian capital.

Mass protests have been happening in Minsk every Sunday since August, when President Alexander Lukashenko was re-elected for a sixth term in a vote that his critics call rigged. More often than not, opposition activists have faced police crackdowns, with dozens of arrests made during protest events.

In addition to the heavy presence of law enforcement, the authorities have also ordered the closure of three metro stations, citing security concerns. There are also reports of mobile internet traffic being throttled in the city.

This week’s rally is linked to the day on which Belarusians commemorate their ancestors, which will be marked on Monday. The opposition forces are set to march from a park in northeastern Minsk to a place on the outskirts of the city, where victims of Stalin-era terror were secretly buried in the 1930s. The mass graves and their grim origin were re-discovered in the late 1980s, and the place was turned into a memorial and a traditional rallying point for anti-government forces.