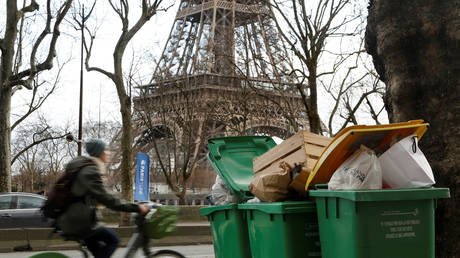 Sanitation workers in Paris started a strike in the French capital on Tuesday, setting trash alight while protesting against worsening working conditions and the planned reform of their sector.

The public services union organized a rally for Tuesday, with scores of workers blocking a street near the city’s cleaning department, burning dustbins and throwing documents from the roof.

Of the city’s 4,900 garbage collectors and 200 sewer workers, a reported 20 percent went on strike.

The protesters say they “deserve a minimum of recognition,” citing “a real health fear” over the conditions of their work and noting, in particular, that protective ‘wetsuits’ and maintenance workshops are no longer up to standard.

Workers also complained that bonuses, which were granted during the first lockdown, are being abandoned now, particularly given the ongoing health risk. “Since the start of the health crisis in France, 397 of our colleagues have tested positive for Covid and 25 of them have been hospitalized,” according to Régis Vieceli, a CGT union delegate for garbage collectors.

The protesting sanitation workers are also opposing legislation to transform the country’s civil service, which paves the way for reductions in public spending and could lead to layoffs. They are also worried that the city may be moving towards privatization of the service, Vieceli said.

Among the questions city officials have yet to answer is whether they intend to put garbage collectors “under surveillance” via GPS, as has been rumored.

It is not clear now when the strike – which also poses health hazards for Paris over the 3,000 tons of waste the city produces every day – will end. Sanitation workers went on strike in January and February against planned pension reforms, and six out of seven waste incineration plants in Paris were closed.