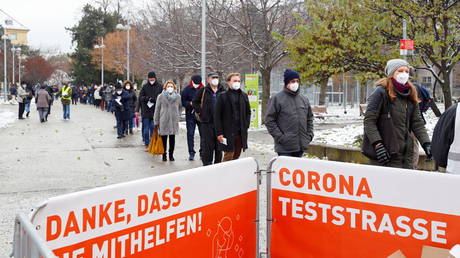 Vienna is preparing to launch its mass vaccination campaign, scheduled to begin on Sunday. High-risk groups of the population including the country’s elderly will be given priority immunization.

High-risk groups of Austria’s population will be given priority in getting a vaccine against coronavirus. Those eligible include medical and nursing homes workers, as well as the elderly. Austria’s approach appears to be quite unorthodox, as many countries worldwide have opted to roll out the vaccines for younger people first in order to shield the older citizens from potential adverse effects of the Covid-19 shots.

Mass vaccination of Austria’s elderly will kick off in January, with five volunteers aged over 80 already determined to be the first ones within their age group to get a jab.

“These are mainly people who are at risk due to their old age,” President of the Austrian Society for Vaccinology, Ursula Wiedermann-Schmidt, said as she spoke alongside Kurz.

Austria’s officials argued the priority vaccination for the elderly was necessary as such people have been at a significantly higher risk of dying from the disease. Namely, the mortality rates for coronavirus patients aged over 75 years have been hovering around the 10 percent mark. For people over 85 the situation is even worse, with one in four dying from Covid-19.

A similar approach has been adopted by the UK, which began its vaccine rollout earlier this month with elder citizens as well. A 90-year-old woman from Northern Ireland, Margaret Keenan, became the first person to receive the vaccine in the country.

So far, Austria has been affected rather mildly by the ongoing coronavirus pandemic, compared to other European nations. It has clocked in over 344,000 cases, including some 5,600 deaths.

Still, the figures are arguably quite large for the almost nine million nation, and the country’s government has already announced it will enter its third coronavirus lockdown immediately after Christmas.

The country’s goal, which would allow the much-anticipated “return to normal,” is to achieve a seven-day increase in new cases of less than 100 cases per 100,000 residents, as well as to ramp up testing to keep the numbers low.