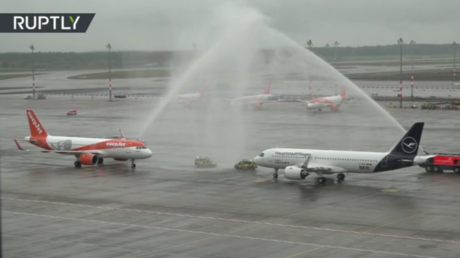 After a decade of delays and a massive budget overspend, Berlin’s Brandenburg Willy Brandt Airport finally welcomed its first airplanes on Saturday as Easyjet and Lufthansa flights safely touched down in the German capital.

Almost 30 years after plans for the airport were first devised, the two jets touched down within minutes of each other on Saturday afternoon. The airport’s operators will hope this finally draws a line under the facility’s lengthy period of turbulence.It had been hoped that the planes would complete a parallel landing, however that had to be scrapped shortly before touchdown due to the weather.The airport is named after the former West Germany Chancellor Willy Brandt. It will replace the city’s smaller Schoenefeld and Tegel airports. Schoenefeld will be used as a third terminal for the new airport, while Tegel will be shut down for good, after 60 years of service. The first planned opening of the project was delayed in 2010, when the construction planning company overseeing the build went bankrupt and new European safety regulations were introduced.The costs of the project spiraled from an original budget of €2.7 billion to almost €6 billion when it was finally completed.

The chief executive of the Berlin airport authority, Engelbert Luetke Daldrup, said it was decided to make the airport’s opening a muted affair because the long-running fiasco had made Berlin and Germany “a laughing stock.” “There will be no big party. We’re simply going to open,” Luetke Daldrup said.Extinction Rebellion activists didn’t go along with this desire for a low-key opening as they staged a climate protest at the airport to coincide with the plane’s landings.Like this story? Share it with a friend!