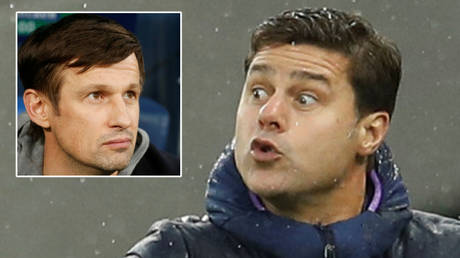 Former Tottenham boss Mauricio Pochettino could take over at Zenit should the club’s uncertain form continue under Sergey Semak, who was not first choice when he was appointed and has no room for error, according to an agent.

Aleksandr Manyakov, whose FM Sports Agency has represented Zenit players and claims to be a partner of the Russian Football Union, has fueled talk of a possible move for out-of-work Pochettino after news emerged that the reigning Russian champions were lining up a move for the 2019 Champions League finalist.

Zenit head to Dortmund for a foreboding Champions League test tonight after defeat in two successive home matches, losing 2-1 to Club Brugge and Rubin Kazan as part of an unconvincing start to the season under Russian coach Sergei Semak.

“Even before being appointed [as manager], Semak was only one of the candidates for the post of head coach – and not the most obvious,” Manyakov wrote on Telegram.

“His appointment was linked to the fact that at that moment there was no agreement with the main candidate – a top foreigner.

“During all his time at Zenit, in my opinion Semak has not had the right to make a mistake but…his work and results didn’t provide a reason [for him] to be doubted.

“However, recently we’ve seen that Zenit are sliding. I don’t think the leadership will make impulsive decisions, and yet Pochettino’s appearance at Zenit is quite possible if [Semak] doesn’t rectify the situation.”

Semak has won the Russian Premier League in each of his two seasons since being appointed manager, adding the Russian Cup earlier this year.

Zenit’s form in Europe has been less impressive, missing out on the consolation of a Europa League challenge after finishing bottom of their Champions League group on goal difference last season.

Manyakov said that the departure of striker Aleksandr Kokorin, who had a prolific loan spell at Sochi last season and has now joined Spartak Moscow, demonstrated a lack of control at the club for Semak.

The coach had described Kokorin as one of the best forwards in Russia but had admitted that he did not know whether the star would stay at the club.

Pochettino has been linked with a procession of huge clubs including Real Madrid and Manchester United, although he is under little pressure to accept any offers and is still thought to receive a salary of around $11 million from Spurs following his abrupt sacking in 2019.

The ex-Argentina international was linked with a $6.5 million-a-year move to St. Petersburg on Tuesday, only for Sporting Director Javier Ribalta to reportedly dismiss the reports.

Former Russia and England coach Fabio Capello also suggested that a lack of quality within the club’s squad could deter Pochettino from making a potential switch.

If you already had COVID-19, can you get it again? What we do and don't know about reinfection