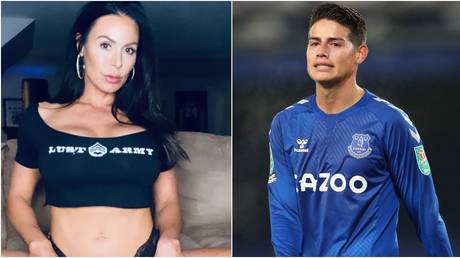 Colombian ace Rodriguez was left in agony after taking a knee to the groin while competing for the ball with Liverpool defender Virgil van Dijk in the early stages of their Premier League clash this month.

Rodriguez finished the match and is believed to have struggled through the pain during the Toffees’ subsequent game at Southampton last weekend.

The Everton star shared an image with his 46.6 million Instagram followers of himself receiving treatment from a Normatec device, and according to Marca pressure therapy has been applied to Rodriguez’s affected area to help ease the blood flow through veins related to the male reproductive organs.

Explaining the difficulties of using ice on testicular injuries sustained by elite athletes, the report suggested that a pump was used on the Colombia creator’s legs in a bid to promote blood circulation and reduce bruising.

The news prompted the hashtag “PrayForJamesBalls” to appear on Twitter – and well-wishers for the midfield ace included legendary adult actress Kendra Lust.

“Ouch. Hope you’re OK,” wrote Lust in reply to a tweet by TalkSport on the 29-year-old Colombian’s unfortunate injury.

Rodriguez and Lust previously made headlines after he ‘followed’ her on Twitter two years ago after breaking up with long-term partner Daniela Ospina.

Back in July, the 42-year-old vixen took to social media to wish the footballer a happy birthday.

Everton suffered their first defeat of the Premier League season as Rodriguez struggled against Southampton, although Toffees boss Carlo Ancelotti has said he is hopeful that the star will be fit for the trip to Newcastle this Sunday.

Rodriguez’s blow was not the only injury-related news from an incident-packed Merseyside derby, which ended 2-2.

After clashing with Rodriguez early on in the match, Dutch defensive colossus Van Dijk was forced off with a cruciate knee ligament injury following a reckless challenge by Everton keeper Jordan Pickford.

The injury is likely to rule the Liverpool defender out for the remainder of the season, dealing a massive blow to their hopes of retaining the title.

Everton, meanwhile, have been a revived forced under Ancelotti this season, with Rodriguez in particular shining since his summer arrival from Real Madrid.

The Colombian maestro has scored three times and registered three assists in six appearances for Everton this season.

Stimulus check qualifications are dizzying. What you should know for a future second payment