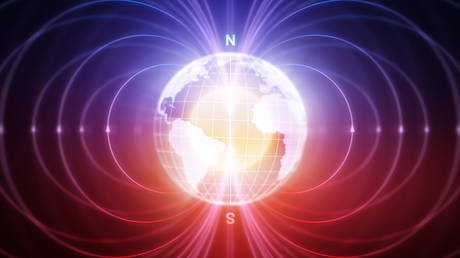 Earth’s magnetic poles have dramatically flipped several times throughout the course of our planet’s history. With another change long overdue, scientists have created the most detailed record yet of the most recent switcheroo.

It sounds unbelievable, but Earth’s poles have routinely reversed every 200,000 to 300,000 years. However, there’s now been no change for around 750,000 years and experts have warned that it’s long over outstanding.

The magnetic field is charged by Earth’s molten metal outer core. It’s crucial to life on our planet, playing a key role in navigational systems and also providing protection from radiation from outer space.

Approximately 40,000 years ago, it attempted to switch before snapping back into place. This NASA illustration captures the enormous disruption to the field during a reversal:

We don’t know much about the effects of such a flip, except that once it is completed, the needle on a compass will tell us that north is south and that south is north. Fresh research has offered a better understanding of the geophysical events leading up to the change and how our planet responded in the aftermath.

The study was conducted by scientists from Japan’s National Institute of Polar Research (NIPR). It reveals that the field became unstable at least 10,000 years before the last direction change actually occurred, and the full reversal process took at least 20,000 years to be completed.

The research team reached their conclusions after collecting a trove of samples and carrying out paleo and rock magnetic analyses. Yuki Haneda, project researcher at the NIPR, said: “Our data is one of the most detailed paleomagnetic records during the Matuyama-Brunhes geomagnetic reversal, offering deep insight into the mechanism of the geomagnetic reversal.”

The boffins now plan to figure out how the geomagnetic reversal influenced plankton and plants by studying marine microfossils and pollen data they collected in their samples.