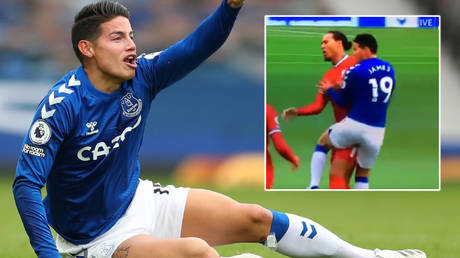 New Everton star James Rodriguez, who has been lauded as the best player in the Premier League since his summer switch from Real Madrid, has reportedly received pressure treatment on a sensitive area after an agonizing collision.

Playmaker Rodriguez was left writhing in pain with less than a minute gone in the hot-tempered Merseyside derby earlier this month, collapsing after taking a knee to the groin as he competed for a bouncing ball with tough-tackling Liverpool defender Virgil van Dijk.

After a Premier League match that became infamous for a knee injury to Van Dijk that is expected to keep him out for at least the rest of the season, Rodriguez struggled to be fit for the Toffees’ next match, at Southampton, and failed to find his usual potency as his side suffered their first defeat of the new season.

Everton boss and former Champions League winner Carlo Ancelotti admitted to serious doubts over Rodriguez’s fitness in the build-up to the 2-0 setback, and the midfielder is now said to have received an unorthodox treatment aimed at reducing pain and inflammation in his penis and testicles.

You could say Van Dijk won the ball…

According to Marca, a pressure therapy was applied to Rodriguez’s affected area using a machine called NORMATEC, which is said to help ease the blood flow through veins related to the male reproductive organs.

Explaining the difficulties of using ice on testicular injuries sustained by elite athletes, the report suggested that a pump was used on the Colombia creator’s legs in a bid to promote blood circulation and reduce bruising.

“James Rodriguez suffered a ‘blow to the testicles’ in the challenge with Virgil van Dijk,” wrote a popular fan account on Twitter, adding the hashtag “PrayForJamesBalls”.

Ancelotti was more reserved in his appraisal of the injury, only confirming that his impressive new acquisition had a “large hemotoma”.

“Unfortunately, James Rodriguez had a problem during the game against Liverpool,” explained the Italian tactician, who had expected the severity of the gruesome blow to keep Rodriguez out of the away trip.

“He had a mistimed tackle with Virgil van Dijk at the beginning of the game and he will not be available for the game against Southampton.”

“You could say Van Dijk won the ball,” said one, reviewing the replay from the action-packed 2-2 draw at Goodison Park. Another wrote: “Don’t rub them, son. Count them.”

The 29-year-old has enjoyed a spectacular start to a season in which Everton won their first seven matches, including four straight Premier League wins as part of an unbeaten five-game league run that culminated in the eventful draw against the reigning champions.

Ancelotti will be hopeful that Rodriguez’s rehabilitation pays off when his players aim to return to winning ways at Newcastle on Sunday.

Older adults: Will you get a second stimulus check, and what to do if you missed the first