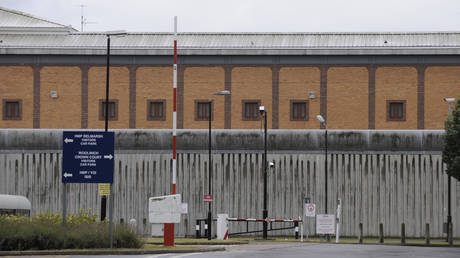 An inmate at the UK’s Belmarsh prison, who was friends with Julian Assange, has committed suicide rather than be deported by the British authorities to Brazil, Assange’s partner has said.

Manoel Santos was gay and feared persecution for his sexuality in his native country, so, after the Home Office served him his deportation notice, he took his own life, Stella Moris said on Twitter. Santos had lived in the UK for 20 years, she added.

“Manoel was at high risk. His suicide was foreseeable. An inquiry into his case might prevent future suicides,” she wrote.

Spoke to Julian. A friend of his killed himself in the early hours of this morning. His body is still in the cell on Julian’s wing. Julian is devastated.Manoel Santos was gay. He’d lived in UK for 20 years. The Home Office served him with a deportation notice to Brazil.(Thread)

Assange himself is “devastated” at Santos’s death, Moris said, conveying his condolences to the Brazilian’s friends and family. Santos had been incarcerated in the same prison block as Assange and occasionally helped him with letters received in Portuguese. He was also “an excellent tenor,” she said.

Moris, a lawyer and a mother to two children with Assange, said her partner hopes the British government will conduct an investigation into the decision to extradite his late friend.

The story bears a clear parallel to that of Assange himself. The Wikileaks founder is being detained at the notorious maximum-security prison in London until his extradition trial. If handed over to the US, he will be tried under the Espionage Act and may spend the rest of his life behind bars.

His supporters have repeatedly warned that both Assange’s physical and mental health have seriously deteriorated. They have petitioned the British government to release him on bail, a request that was denied.

Assange is accused by the US of various computer crimes, including helping whistleblower Chelsea Manning in her leaking of classified US military documents to Wikileaks in 2010. His supporters see the case as a major threat to freedom of the press worldwide, arguing that Washington is trying to punish him for publishing materials that proved embarrassing to the US government.

Conditions in UK prisons under COVID also play a role. Prisoners are separated from their support network, children, parents, partners. They have practically no time out of cell. Many are unconvicted, on remand or non-violent. With no end in sight. It’s inhuman. People lose hope.

Travis Scott deletes Instagram after getting trolled for Halloween costume

Battle lines drawn as sports stars, past and present, back US presidential rivals