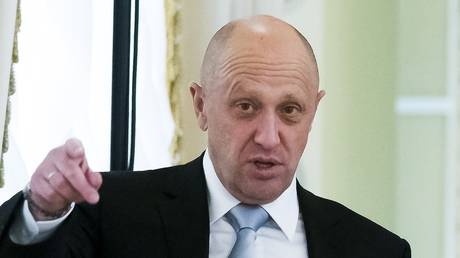 Evgeny Prigozhin, the businessman labeled ‘Putin’s chef’ by Western media, has reportedly filed a defamation case against three Russian journalists over claims they made – and he denies – about his alleged criminal background.

Prigozhin – whose moniker is related to his ownership of the Concord Catering business – has had his lawsuit forwarded to Moscow’s Savelovsky District Court, according to a Thursday report from Latvia-based, Western-funded news outlet Meduza, whose editor-in-chief, Ivan Kolpakov, is named in the litigation.

The complaint was filed over an interview  with TV presenter Maxim Shevchenko – also the head of the Communist Party (KPRF) faction in the Vladimir Region legislative assembly – published by local online news outlet Dovod. The businessman also cites its editor-in-chief Ilya Kosygin.

In the interview, Shevchenko commented on an earlier defamation claim from Prigozhin, in which Shevchenko is a defendant with, among others, Russian political opposition activists Alexey Navalny and Lyubov Sobol. Those two and the Anti-Corruption Foundation – founded by Navalny – lost an earlier case related to their reporting on the Moskovsky Shkolnik food processing company, which they claimed had links to Prigozhin and was accused of spreading dysentery in Moscow kindergartens and schools in December 2018.

Prigozhin denied those links, but did, however, later buy the nearly $1.1 million debt owed by the Anti-Corruption Foundation from that judgement with the intention of “reducing this group of dishonest people to pennilessness and shoelessness.” This led to a lack of funds and the foundation’s dissolution. Now it appears Prigozhin is going after Navalny and Sobol in the courts yet again.

In the Dovod article, Shevchenko commented that Prigozhin is “a twice-convicted felon, one of the charges… involving… prostitution.” The story referenced and linked to a 2016 Meduza article which describes the businessman’s alleged criminal past. Prigozhin’s company has issued a denial specifically about the prostitution allegation, saying that he was convicted of no such charge.

Prigozhin is demanding 5 million rubles each (about $65,500) from Shevchenko, Kosygin, and Kolpakov as compensation for moral damages. He also insists that Meduza and Dovod must delete the articles within 10 days of the court’s ruling coming into force, and publish retractions.

This isn’t the first time Meduza’s Ivan Kolpakov in particular has found himself at the center of media attention – in 2018, he resigned from his post after a #MeToo-style scandal in which he was accused of and admitted to groping a colleague’s wife at an office party. A few months later in November 2019, he was back, reinstated as chief editor.

Meduza’s reporting is focused on Russia despite being headquartered in Riga, Latvia and has in the past received funding from the Swedish government’s International Development Cooperation Agency as well as the American non-profit OAK Foundation. It has frequently focused its sights on Prigozhin’s business interests. The outlet has reported on Prigozhin’s alleged links to the Wagner private military company, as well as the so-called ‘troll farm’ Internet Research Agency. The businessman has previously denied links to both organizations.