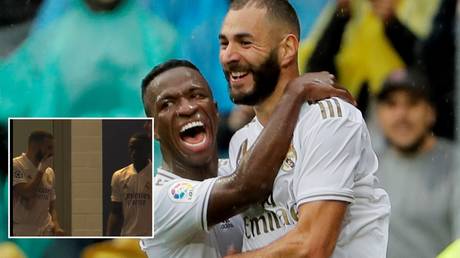 Real Madrid striker Karim Benzema reportedly held a “clear the air” talk with Vinicius Jr in training on Thursday after footage emerged in which he appeared to tell Ferland Mendy not to pass to him.

The Frenchman was filmed speaking to his compatriot in the tunnel at halftime in Real’s 2-2 draw with Borussia Monchengladbach in the UEFA Champions League, supposedly telling him: “Brother don’t play to him. On my mother’s life. He is playing against us.”

Although he did not name the Brazilian, it was thought he was referring to Vinicius.

Karim Benzema tells Ferland Mendy not to pass to Vinicius Jr at half-time during last night’s game between Gladbach & Real Madrid: “Brother don’t play to him. On my mother’s life. He is playing against us.” pic.twitter.com/zmpciQRgAV

Los Blancos returned to training on Thursday, having had a rest day on Wednesday, and Benzema reportedly approached the 20-year-old to discuss the issue.

It’s said Vinicius was satisfied with Benzema’s explanation of what happened, and the pair consider the matter closed.

Madrid had to come from two goals down at Borussia-Park after a brace from Marcus Thuram.

He rifled home a first-time finish from Alassane Plea’s pass to give them a first-half lead, then doubled their tally in the second when he tapped in a close-range rebound after Thibaut Courtois had parried a shot from Plea straight into his path.

Vinicius had a good chance to score in the game when he found himself unmarked in the penalty area, but he blasted over.

Benzema pulled one back in the 87th minute with a close-range over-the-shoulder volley, before Casemiro netted an injury-time equalizer from Sergio Ramos’ knockdown.

Vinicius was substituted in the 70th minute, and Benzema had not passed to him once after the break.

0 – Karim Benzema didn’t pass a single ball to Vinicius Jr in the second half in the Champions League game vs Borussia Mönchengladbach (three in the first half). Distance. pic.twitter.com/OJ52Qh2Qym

However, it’s said the pair have a strong relationship and that the senior striker does not want to harm the youngster’s confidence.

Indeed, in November last year Vinicius said he had a “special bond” with the forward.

The Brazilian enjoyed an excellent debut season in the 2018-19 campaign, in which he made 12 assists and scored three goals.

He hasn’t quite kicked on as hoped since then, and last season he contributed five goals and three assists.

Vinicius often lacks composure in front of goal and loses possession when an attempted take-on goes awry, but he remains an exciting and hardworking player.

He has three goals for Real this season, meaning he is currently the team’s highest scorer.

The best antivirus protection for Windows 10 in 2020