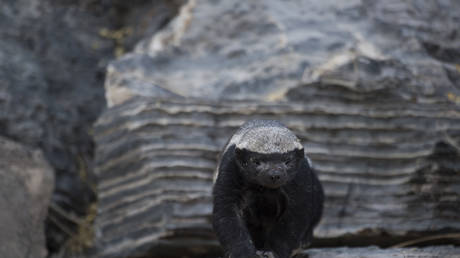 In new research, paleontologists working along the west coast of South Africa have confirmed the existence of an ancient relative of the modern honey badger that once terrorized the African savannah.

The existence of a honey-badger-like animal had been hinted at by previous fossil finds, but has now been confirmed by Alberto Valenciano Vaquero and Romala Govender, who were conducting research for the Iziko Museums of South Africa.

“Even large carnivores, such as leopards, hyenas, and lions stay out of their way,” said lead report author Valenciano Vaquero.

The five-million-year-old honey badger cousin roamed the plains of southern Africa alongside the likes of giant wolverines and otters, bears, and saber-toothed cats, among other nightmarish super-predators.

The honey badger (also known as a ratel) is a member of the mustelid family of creatures, which includes weasels, otters, and common badgers, and predominantly inhabits sub-Saharan Africa and East Asia. In the researchers’ estimations, the old-school honey badger was “adapted for pursuit unlike any mustelids seen today.”

Despite its relatively small size (9-14kg), the modern creature is notorious for being one of the most ferocious, aggressive, and borderline invincible creatures on the planet, being known to recover from venomous snake bites that would kill its much larger mammalian contemporaries.

According to the researchers, the ancient relative (Mellivora benfieldi) of the modern honey badger (Mellivora capensis) was smaller but possessed the same sharp teeth, long claws, and bad attitude necessary for survival in such inhospitable conditions among such fierce rivals on the African plains.

The fossils were discovered at Langebaanweg in the West Coast Fossil Park, where a plethora of prehistoric predator fossils have been found, including of saber-toothed cats, bears, hyenas, and  jackals, as well as of the predecessors of giraffes, elephants, and rhinoceroses, among others.

“The new honey badger fossils we describe triple the number of known fossils and give us a unique glimpse into its lifestyle and relationship to other similar mustelids,” said Valenciano Vaquero.