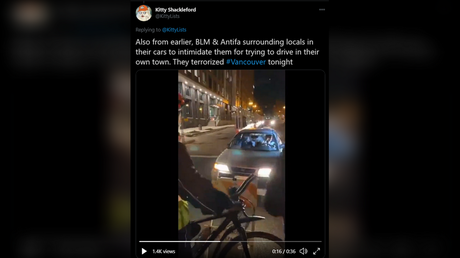 Violent demonstrators burned US flags, smashed windows and attacked drivers following a police shooting in a city near Portland, Oregon. Police in riot gear moved in to disperse the mob.

Vancouver, Washington, located about 12 miles north of Portland, resembled a war zone on Friday night as protesters blocked traffic and vandalized buildings. The unrest began with a vigil for a black man, identified by family as Kevin Peterson, who’d been shot and killed by local police during a pursuit in which he’d allegedly pulled a gun. But after the peaceful memorial service, several hundred protesters rampaged through downtown Vancouver.

Videos posted to social media show mayhem in Washington city. One man was filmed lighting an American flag on fire as he shouted “death to your f***ing empire.”

The angry mob also targeted businesses, smashing windows and spray-painting anti-police graffiti. Protesters surrounded one shop that was guarded by a man with an assault rifle. The group was filmed repeatedly taunting the armed man.

Footage also shows several incidents in which drivers were stopped and attacked by demonstrators. In one shocking clip, it appears that several gunshots were fired from a vehicle, although it’s not clear who was in it.

Vancouver police intervened, with officers blocking roadways and ordering protesters to clear the streets. Federal agents were at the scene to help disperse the mob, according to eyewitness reports.

Authorities are still investigating the circumstances that led to Peterson’s killing. Law enforcement officials say that officers attempted to apprehend the 21-year-old during a narcotics investigation, but that he fled the scene while brandishing a weapon. He was shot and killed by three deputies that he encountered while making his escape. It’s not clear whether Peterson fired a weapon at police during the altercation.

The latest unrest follows months of nearly nightly protests in Portland, following the death of George Floyd at the hands of Minneapolis police in May. The anti-racism demonstrations have often descended into violence.