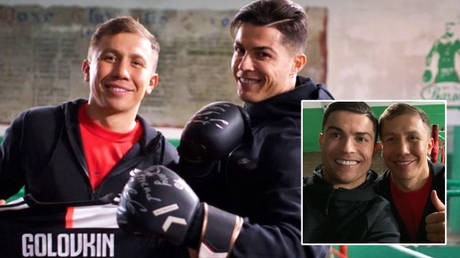 Cristiano Ronaldo has encouraged men to cry and show their emotions while professing his love of boxing and UFC to Gennady Golovkin, tellng the Kazakh fighter of the need to “fight for your life” to emerge from humble beginnings.

The Portugal captain has made little secret of his passion for combat sports, posing with UFC lightweight king Khabib Nurmagomedov and publicly supporting the Russian champion ahead of his retirement win over Justin Gaethje in October.

Now Ronaldo has spoken candidly with revered puncher Golovkin, admitting that he tried boxing but would have found the sport too hard to have pursued as his breathtaking talent with a ball took over.

“I don’t think I could have been a boxer,” Ronaldo told the two-time middleweight champion on DAZN. “It’s tough.

“You have to be born for it, with that gift. I think I was born to be a professional footballer. I thought I had that gift from the beginning and I said to myself: ‘I’m going to grab this opportunity with both hands.’

“Playing football is my passion but then I prefer to watch other sports on television. Between a football game or watching a boxing match or UFC, I choose boxing and the UFC.”

A superstar of his sport, 38-year-old Golokvin has mimicked Ronaldo in showing few signs of slowing down despite passing the age at which many of his rivals have retired, returning to the ring this Friday to face Kamil Szeremeta.

“The best athletes are those who anticipate what is going to happen,” he said. “That is the case in the ring but it is also the reason why, in matches, players clearly target Cristiano to get him out of the match.

“In boxing, the plan of the rival cannot affect you. You must focus on yours.”

Ronaldo pointed out the individual nature of boxing and said that training was “more fun” as a footballer and “a different kind of sacrifice,” adding that he had found boxing sharpened his senses and movement when he sparred with a coach while he was at Manchester United.

Reflecting on their backgrounds, he said: “We have both grown up in different environments and cultures.

“It has been hard because we come from humble families. We weren’t rich, so you have to fight for your life. The circumstances in which you grow up harden your character and your personality.

“I was born on the island of Madeira and, at age 11, Sporting went to talk to my parents. They told them they were interested in me but that I had I have to move to Lisbon.

“Leaving my family is the most difficult thing I have ever done in my life. I went away and cried every day because I missed them.

“My hardest moments have been when I moved to Lisbon and when I lost my father [in 2005]. I think it’s good to have emotions – I don’t hide who I am.

“Who said that men don’t cry? We all have feelings and emotions and we have to express them.”

Golovkin also has a fondness for football. “Soccer was my first sport,” he said. “I practiced it for three years.

“20 years ago, the situation was not going well in Kazakhstan because the USSR had dissolved and everything was broken. I loved football.

“A friend told me that there was a good football club made up of guys from a boxing club. We beat them and they told me, ‘why not try boxing? Try it, because we will beat you.’

“I did not win because they put me in the ring with a tough guy. I remember in my first training session I hit my partner on the nose and he bled. He hit me and told me to come back the next day.”

“GGG” has continued his fearsome knockout record during his 30s, while 35-year-old Ronaldo’s incredible rate of goals reached another milestone recently when he scored his 750th career goal.

“Last summer I had a talk about [ageing] with Anthony Joshua in Dubai,” he said. “At 33, you start to think that you are going downhill.

“People will look at me and say, ‘Cristiano was an incredible player but now he’s slow.’ I don’t want that.

“In sport, you can gain maturity. Look at [Roger] Federer in tennis: he is 37 or 38 and still at the top, and in boxing there are quite a few fighters like that.

“You can take care of your body a lot, but that’s not the problem. It depends on your head, your motivation and experience, which I think is the most difficult thing.”