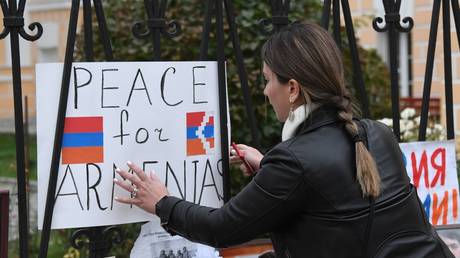 Moscow has promised to provide the “necessary assistance” to Armenia if ongoing fighting in the Azerbaijani breakaway Nagorno-Karabakh region reaches the country’s territory, after Yerevan called on the Kremlin for help.

Russia has signaled it is ready to get more involved in the conflict between Azerbaijan and the self-proclaimed Nagorno-Karabakh republic, backed by Armenia. The “assistance” will come only if the fighting reaches the territory of Armenia, which has security agreements with Russia, however.

The ministry’s statement came after Armenia’s PM, Nikol Pashinyan called upon Russia’s President Vladimir Putin to begin “urgent” negotiations on possible security assistance. Earlier on Saturday, the Armenian leader sent a letter to Putin, stressing that the fighting was about to reach his country’s borders and bemoaning Turkey’s backing of Baku’s troops.

Ankara has openly voiced its support for its “Azerbaijani brothers,” as well as faced accusations of providing direct aerial support to Baku and even of transporting Syrian militants into the war zone. Turkey and Azerbaijan have firmly denied the allegations, however.

The intense fighting began in the Nagorno-Karabakh region, which is predominantly populated by ethnic Armenians, late in September. Armenia and Azerbaijan have accused each other of starting the new round of hostilities, as well as repeatedly blamed one another for striking civilian targets. The conflict has already resulted in heavy losses among both Armenian-backed and Azerbaijani troops, as well as taking its toll on the civilian population, which has fled the war zone en masse.

Both sides of the conflict refuse to lay down their arms, each accusing the other of unwillingness to seek a compromise or make any concessions. All the international efforts to broker a ceasefire, including attempts by Russia and the US, have flopped, with each truce holding for a handful of hours at best.

While Nagorno-Karabakh broke away from Azerbaijan back in the 1990s, after a bloody war, Baku continues to regard the self-proclaimed republic as an integral part of the country. Armenia has backed the region for years, yet stopped short of recognizing its independence.