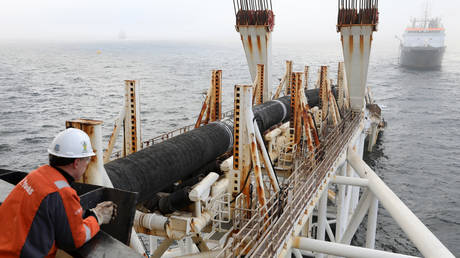 If Washington proceeds with sanctions against the Russia-led natural gas pipeline, Nord Stream 2, it will hurt a wide range of Western contractors and investors involved in the undertaking, the project operator has warned.

“If imposed, [the sanctions] could directly hit more than 120 companies from more than 12 European countries,” the company said on Wednesday, as quoted by Russian media.The pipeline, designed to boost gas supplies to Germany and other European states by 55 billion cubic meters (bcm) per year, has already been granted all the necessary permits from regulators, the operator added. The underwater link is 94 percent complete, with pipes already stretching across 2,300km of its total length of 2,460km.

The statement comes less than 24 hours after the US State Department announced the extension of sanctions against the project as it broadened the interpretation of Congress’ Protecting Europe’s Energy Security Act of 2019. It now applies to companies that provide services or funds for the upgrade or installation of equipment on ships for laying the gas pipeline. The US gave the firms 30 days to ditch the project or face potential sanctions.Russia has already condemned the move, with Kremlin spokesman Dmitry Peskov comparing it to a hostile takeover. Speaking to reporters, Peskov said such a destructive policy and the constant introduction of different restrictions against Russia only further damage relations between Moscow and Washington.

52 of the best TV shows to watch on Netflix