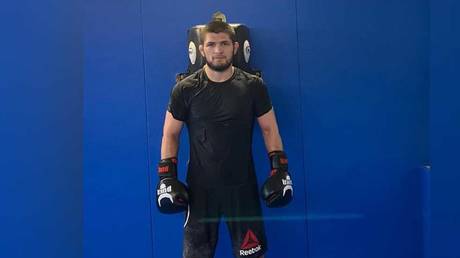 After Khabib Nurmagomedov called time on his octagon career, attention has turned to what the UFC legend does next – and Russia’s boxing chief has suggested he has the answer.

Khabib submitted Justin Gaethje in the second round of their lightweight title fight at UFC 254 in Abu Dhabi last weekend, before immediately breaking down in tears and announcing he was walking away from the octagon.

The 32-year-old star revealed that he was honoring a vow he had made to his mother before the fight that he would no longer compete following the death of his father and trainer Abdulmanap back in July.

Khabib – who claimed Gaethje as his 29th victim in an unblemished MMA career, and finally ascended to the top of the UFC pound-for-pound rankings this week – has since shown no sign of reversing his decision to hang up his gloves.

Arriving back in Russia, Khabib said he was well aware he could continue on a lucrative track in the UFC, but that he would not be tempted back by promotion boss Dana White.

“Of course Dana wants me to continue fighting and generate revenue,” said ‘The Eagle’.

”[But] I can make money myself. I’m at the peak of my career and can fight for very large purses, but I made this decision, and I think this is the best time.

“Not everyone can retire at their peak, but I know that in a year, two or five (years) I’d have to face that decision again. I did enough in the sport to be considered the best.

“Today, I was ranked as the No. 1 pound-for-pound fighter, so the mission is accomplished. What else is there to do? Make money? I’ll always be able to do that.”

As for what comes next, Russian Boxing Federation chief Umar Kremlev has said the organization would be ready to step in to offer Khabib a charity or exhibition bout, should he wish to step between the ropes.

“As for his decision (to retire), he left beautifully, undefeated.

“A charity or exhibition boxing bout? If he wants that, we’re ready to organize it.”

Kremlev has previously offered to host a boxing match between Khabib and American icon Floyd Mayweather Jr, saying back in October of 2018 – when talk of a crossover contest with the American first surfaced following Khabib’s victory over Conor McGregor – that he could put on an event in front of 100,000 fans in Moscow.

That kind of speculation is likely to be reignited now that Khabib has stepped away from the octagon, although it’s unclear how it would square with the Dagestani star’s vow to his family not to compete.

A charity bout could allow him to make an exception, and would no doubt be a blockbuster earner possibly even to trump former UFC nemesis Conor McGregor’s money-spinning showdown with Mayweather in Las Vegas in the summer of 2017.

If you already had COVID-19, can you get it again? What we do and don't know about reinfection