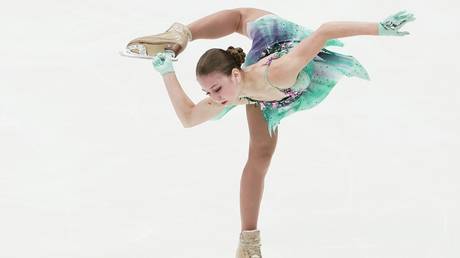 The 16-year-old who has been coached by the two-time Olympic champion Evgeni Plushenko threw a quadruple lutz while holding her arms up over her head.

“Wow, Sasha, you are super cool! 4Lz with arms up – that has never been seen before,” Plushenko captioned the video of Trusova’s successful attempt which he shared on social media.

The two-time world junior champion Trusova has already entered her name into record books by becoming the first female athlete to execute a quad jump at an international figure skating event.

She is the only one to master all five quad jumps, an achievement which even some of the top male skaters cannot boast of.

Recently she acquired a quad loop, the only missing jump in her “collection” of quads, becoming a true trailblazer in women’s skating and setting the pace for the rest of her competitors.

In May, Trusova made a sensational career switch by parting ways with renowned coach Eteri Tutberidze to join Plushenko’s academy.

The move was widely discussed in the figure skating community with the two coaches getting involved in an intense social media spat especially after one more star, Alena Kostornaia, also left Tutberidze’s camp.

Trusova got off to a brilliant start under Plushenko’s tutelage, confidently winning the second stage of the Cup of Russia in Moscow.

Halo Infinite loses director after being delayed to 2021